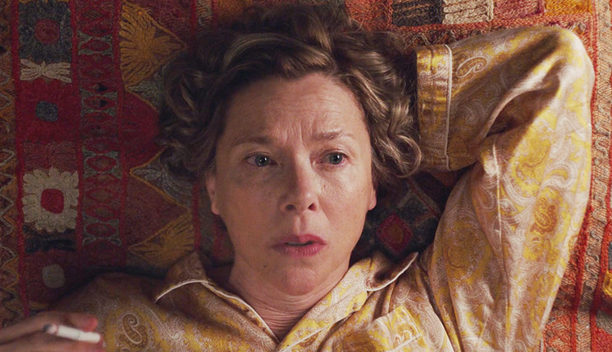 Yes, you know Paul McCartney. And Stella McCartney, one of his daughters. But here comes Mary McCartney, photographer daughter of Paul and his late and much missed wife Linda. Mary, I can tell you, is now a video director. She’s preparing a video now for Elvis Costello’s “You Shouldn’t Look at Me That Way.” This is the song that plays over the end titles of Paul McGuigan’s excellent new film, “Film Stars Don’t Die in Liverpool,” which premiered here yesterday.

Annette Bening plays Hollywood siren and Oscar winner Gloria Grahame, Jamie Bell is her young lover Peter Turner. The story is based on Peter’s memoir and produced by the James Bond team of Barbara Broccoli and Michael S. Wilson.

The backstory for the song is that McGuigan and Broccoli went to to a Costello show last year at which, by coincidence, Costello mentioned Grahame in his patter. “We knew it was meant to be,” McGuigan told me last night at Sony Pictures Classics’s annual star studded dinner. “We went backstage and told him about the movie. He said, I’ll write you a song. And sure enough, on Christmas Day, it arrived in our emails. And it was perfect. ”

And he’s right. “You Shouldn’t Look at Me That Way” should be a Best Song nominee. Of course, the McCartneys and Costello have a history of collaborations. Paul and Elvis had a hit album together in 1989 with “Flowers in the Dirt.”

As for “Film Stars,” watch for Bening to be a strong contender for Best Actress. She does her usual fine work as Grahame, creating a captivating portrait of the movie star’s tragic life.