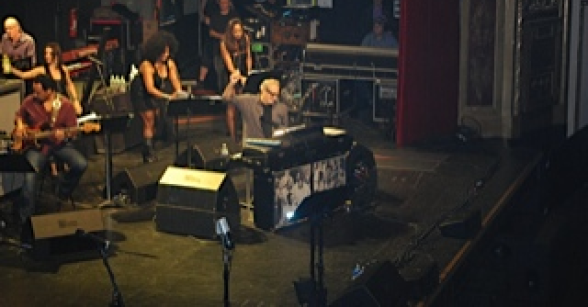 Steely Dan fans showed their support and love for the group and the late Walter Becker over the weekend.

The entire Dan catalog– the original 7 albums plus the Grammy winning “Two Against Nature” have now zoomed up the iTunes chart. They are all on the top albums chart this morning, along with a greatest hits package “A Decade of Steely Dan.”

The same can be said over at Amazon, where all the albums starting with “Aja” have come to occupy slots on the top 100.

If fans really want to honor Becker, they could also be buying his solo album “11 Tracks of Whack.”

Meantime, Becker’s partner and pal for 50 years, Donald Fagen, cancelled his show last night in San Antonio, Texas. I don’t know how he could have done it given the circumstances.

There are also some nice remembrances that have been published, by journalist turned filmmaker Cameron Crowe on his website, and by Rickie Lee Jones on hers. Rickie opened for Steely Dan last fall at the Beacon; Walter had produced one of her albums.

What happens next should be interesting. Steely Dan usually sits down at the Beacon Theater in New York for a dozen or more shows in October. The dates haven’t been announced yet. But you can bet they will serve as a memorial event to Becker with tickets selling out instantly.