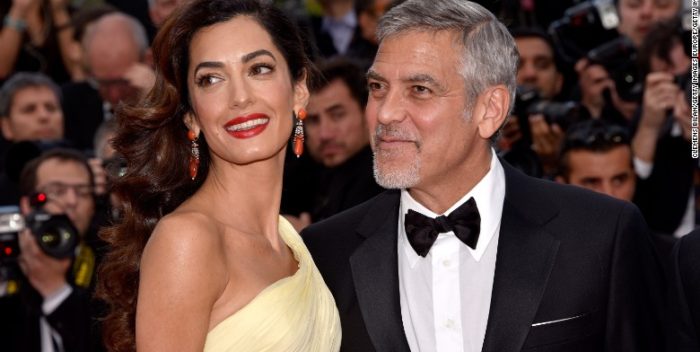 All that tequila money is going to a good cause. This morning George and Amal Clooney announced a $1 million donation to the Southern Poverty Law Center to combat hate groups. The Clooneys recently made about $250 million from the sale of George and partner Rande Gerber’s tequila company. They formed the George and Amal Clooney Foundation for Social Justice.

In a statement George said: “Amal and I wanted to add our voice (and financial assistance) to the ongoing fight for equality. There are no two sides to bigotry and hate.”

“Like George and Amal Clooney, we were shocked by the size, ugliness, and ferocity of the white supremacist gathering in Charlottesville,” said SPLC President Richard Cohen. “It was a reflection of just how much Trump’s incendiary campaign and presidency has energized the radical right. We are deeply grateful to the Clooney Foundation for standing with us at this critical moment in our country’s fight against hate.”

Clooney has also been passionate about trying to help the people of Sudan. With late producer Jerry Weintraub and pals Don Cheadle and Matt Damon he also started the Not On My Watch Foundation. I’ve written before about how Clooney and friends have invested in satellites that monitor violence and human rights violations in Sudan.

The announcement this morning comes at a perfect juxtaposition to reports about Treasury Secretary Steven Mnuchin and his horrid wife Louise Linton. The latter is cited everywhere today for berating a writer to her Instagram page about the Mnuchins’ lavish lifestyle and sense of entitlement.