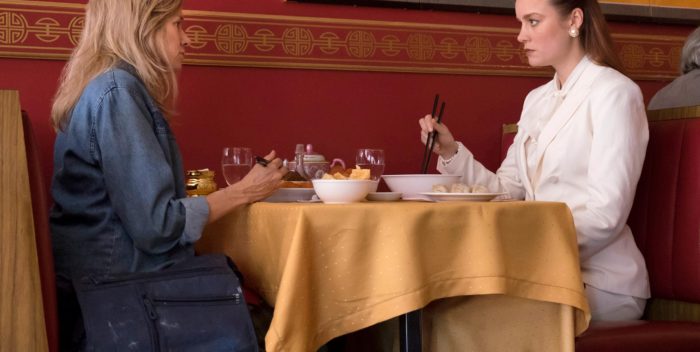 Naomi Watts is so good in “The Glass Castle,” along with Brie Larson, a bunch of talented kids and most especially Woody Harrelson. At last night’s premiere for Dustin Daniel Cretton’s excellent adaptation of Jeannette Walls’s best selling memoir, Naomi had a lot of things to discuss– this movie, her series “Gypsy,” and “Twin Peaks,” where she’s been playing a suburban Lady MacBeth who knows more than she’s letting on. (Naomi as always is MVP of the movie and TV world.)

So I asked Naomi about “Twin Peaks,” which readers here know I hate watch with the hope that someday something will happen.

“Is it good? I’m sure it’s good. But I haven’t watched it yet,” Naomi told me. I explained where we were and what was going on. She liked the Lady MacBeth reference. “Do you want to know what’s going to happen?” she said, teasing me. “I’m not going to tell you. We can’t say anything.”

In “The Glass Castle,” Naomi plays Jeannette Walls’s real life mother, Rosemary. You know that Jeannette was a famous New York gossip columnist at New York Magazine. She was glamorous and beautiful and smart. (I succeeded her at the Intelligencer column in 1994.) No one knew during her long, successful run that she had a secret: her parents, dreamers who lived off the grid and in poverty, were squatters in a New York tenement. Jeannette and her siblings had been raised in squalid conditions with a lot of abuse and neglect. When her dad died in 1994, Jeannette left the gossip trade and wrote her story. It became a bestseller.

Cretton directed Oscar winner Brie Larson in “Short Term 12,” and here Brie plays Jeannette as an adult, taking over from two exceptional younger actresses– Chandler Head and Ella Anderson. Woody Harrelson is Rex, Jeannette’s father, who’s sort of a cross between Viggo Mortensen in “Captain Fantastic” and Harrison Ford in “The Mosquito Coast.” All the actors are terrific, with Harrelson maybe giving the most surprising performance. Larson continues to astound.

Among the guests last night: director Simon Curtis, who’s got “Goodbye Christopher Robin” coming this fall from Fox Searchlight. He’s married Elizabeth McGovern, aka Lady Cora Grantham. What does he know about the “Downton Abbey” movie? “As usual, almost nothing,” he said with a chuckle. “I guess it will happen next year.” Also on hand: my old pal Josh Lucas, who raking it in doing voice overs for hardware store commercials. He’ll be on Broadway this fall in “The Parisian Woman” with Uma Thurman.

As for “The Glass Castle,” it’s not perfect, but it’s important and moving. We look at people around us thinking, they’ve got it made. That’s what we all used to think about Jeannette. I mean, we thought she was Miss America. To see what’s she and her siblings lived through, and what they accomplished coming out of it, it’s an amazing story. The journey to serenity is never easy.