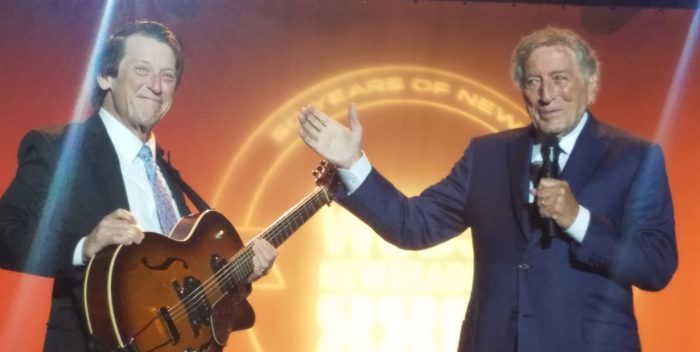 Tony Bennett, who just 91 years young, wowed the crowd last night at Newradio88 WCBS’s 50th anniversary at the Playstation Theater. And what a night! Tony finished off the program with aplomb, singing two songs. Before that he sat down with CBS’s Anthony Mason and told us who changed his name from Anthony Dominic Benedetto–nother than Bob Hope! “He said that’s no good, how about Tony Bennett?”

But the real stars were the voices of Newsradio 88 who are seared in my head– you never see their faces! And so there were Wayne Cabot, Pat Farnack, Steve Scott, Paul Murnane, Michael Wallace and the vet– Rich Lamb. Plus we got to see what Marla Diamond really looks like! Jeffrey Lyons — the one and only– was there, too.

I finally got to meet Irene Cornell, Dean of New York radio. Irene has been covering the courts– particularly mob stories, her favorite– for decades. She just retired, which seems impossible. Her reporting was as informative and succinct as good radio can be, whether covering OJ Simpson’s trial or a good mob murder in Brooklyn. She went everywhere. I hope she has a lot of awards. New Yorkers really owe her a debt of gratitude.

A great night– AM radio is still our best way to get news quickly. It better not go away!

Here’s Tony– amazing– who gets the last laugh now? He does. Listen, watch. Learn.