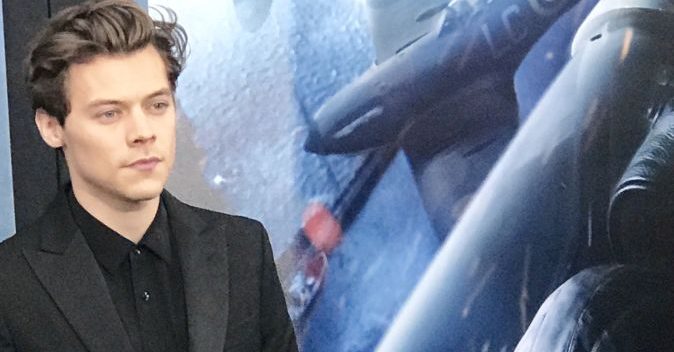 Harry Styles is a movie star. The former One Direction singer has an integral role in Christopher Nolan’s “Dunkirk.” It’s not dialogue heavy, but it’s just enough that he makes for a strong on screen presence. I had a feeling about this a while ago. Harry’s self titled debut album was not a smash hit– just under 300,000 copies in the US. Those are not Adele, Beyonce, or Drake numbers.

But Harry Styles pops off the screen. And in person, he’s extremely well mannered and pleasant. Now that it’s proven he can really act, just watch for directors and producers to think of musicals for him.

In “Dunkirk,” there is no crooning, however. I asked him last night at Warner Bros.’ swanky Rainbow Room premiere dinner if he broke into song on set at all? There are plenty of scenes with Harry and crowds of young soldiers scrambling to survive the bombing– often while they’re under water.

“No singing,” Harry told me, not even humming. He took his role seriously. Did he get wet? “A lot,” he said, “but it was worth it.” Styles has the admiration of his fellow actors, by the way, starting with Cillian Murphy (pronounced Killian, btw) who was pleasantly surprised by the “Sign of the Times” singer’s talent. “When they first said Harry Styles, you wondered…And then, look at him!”

The “Dunkirk” premiere put a nice exclamation point on Warner Bros.’ super summer that began with “Wonder Woman” flying higher than anyone could have predicted. (The failure of “King Arthur” is not discussed.) “Dunkirk” is that rare mixture of commercial hit and awards getter, so all the execs were out in force– Kevin Tsujihara, Sue Kroll, Toby Emmerich– plus Time Warner chief Jeff Bewkes and even former Sony Pictures chief-now Snapchatter Michael Lynton. Brenda Vaccaro– waiting to hear if her “Gypsy” show on Netflix is renewed (it should be) made a rare appearance, and I ran into “Soprano’s” creator David Chase with wife Denise, Hoda Kotb and Kathie Lee Gifford, Oscar nominee Lucas Hedges, and Spike and Tonya Lee.