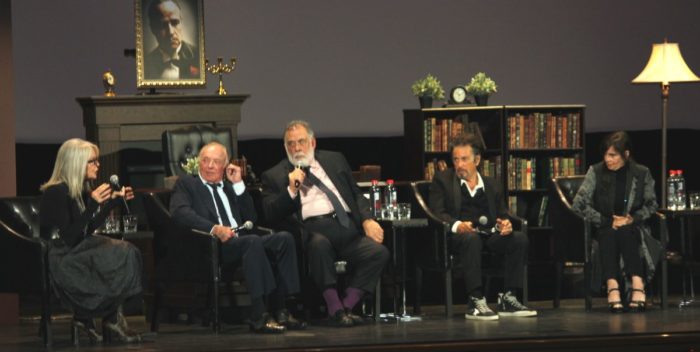 I had fun watching “The Godfather” reunion Q&A panel on Facebook. At least I was at home. Some people were in Radio City Music Hall, where they’d been since at least 1 pm onward for seven or right hours without food.

The finale of the Tribeca Film Festival took place not in Tribeca but at 49th St. and Sixth Avenue, but that’s another story. For the reunion, director Taylor Hackford moderated an austere panel that included: director Francis Ford Coppola, Al Pacino, Robert DeNiro, Robert Duvall, Talia Shire, James Caan and Diane Keaton. Marlon Brando is dead.  Former Paramount chief Robert Evans was mentioned– a lot. Peter Bart, who makes it seem like he made “The Godfather,” was not.

Think of it. The first movie earned Best Actor for Marlon Brando. Producer Al Ruddy won Best Picture.  The second film also won Best Picture. Coppola won Best Director and was also nominated for Best Picture for “The Conversation.” DeNiro won an Oscar for “The Godfather Part 2,” one of five statues the movie won that night.

After that, Keaton, Duvall, and Pacino all went on to win Oscars in other movies. Ruddy would go on to win Best Picture again producing “Million Dollar Baby” in 2005.

Forty five years later they all– except Brando– reunited on the Radio City stage after the audience had watched seven hours of their work.

No one marked the chairs on stage with name signs. So it was up to the actors and the director to take their seats. Keaton was called out by Jane Rosenthal right after Pacino, but she didn’t follow him. And when it came time to sit down, Keaton skillfully moved away from Pacino and made sure two people separated them. Well played. Why? Their romance ended badly in the late 1980s just as “The Godfather III” was being filmed. Whoops!

Hackford, a director, played to Coppola, who had a lot of good stories about getting his cast approved by Paramount. Caan turned out to be pretty good at getting a word in edgewise even though he was semi coherent. Keaton spoke a little, DeNiro almost not at all. Shire talked about being cast despite being Coppola’s sister.

Duvall recalled that Brando was amused by Caan on set. Shire remembered being such a novice that she couldn’t find her mark and walked into a camera on Day 1.

Pacino said he tested countless times, “at least six times” to play Michael Corleone. And he didn’t even want to play Michael. He wanted to play Sonny. Coppola said at one point Pacino’s girlfriend yelled at him over the phone, “You’re torturing him!” Evans thought Pacino was too short and didn’t want him. “He wanted someone tall and handsome, who looked like him. I wanted someone who looked like me,”
Coppola said. Pacino seemed amused by this. “We could be related,” he said, a little sarcasticallyt.

Coppola said he wasn’t such a fan of Mario Puzo’s novel. “I was disappointed,” he said. “It was mostly about Lucy Mancini’s anatomy.” (He’s right, I was 13 when the book was published, and page 27 of the hardcover was a must read among all seventh graders if you could sneak the book out of the parents’ bedroom.)

There was also the revelation that DeNiro was on hold for a role in the first movie, but went off to be in “The Gang That Couldn’t Shoot Straight.” He got the role in that movie that Pacino was supposed to play if he didn’t get “The Godfather.” In 1970 it must have been very stressful. And who would have guessed that in 2017 they’d all be discussing it on stage?