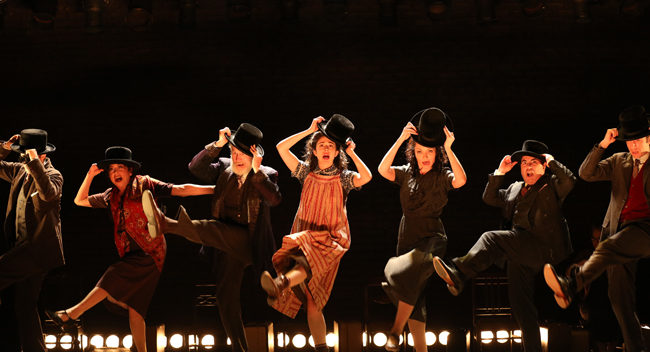 You know a new play will be good if Mercedes Ruehl turns up for opening night. Ruehl, an Oscar and Tony winner, doesn’t come into town from her country home unless she knows a show is going to be special. And there she was last night at the opening of Paula Vogel’s extraordinary, edgy, and profoundly charged “Indecent,” the story of a Yiddish play that caused so much trouble when it opened on Broadway in 1907 that everyone involved was arrested and hauled off to jail.

The play was “God of Vengeance” by Russian writer Sholem Asch. The play was about Jews who use the money from the brothel they’re running to buy a Torah. On top of that, the daughter of the brothel’s owner has fallen in love with one of the prostitutes. A lesbian affair went over pretty well with 1907 Greenwich Village audiences, but when they brought it uptown to Broadway it was a scandal.

Vogel has made the producing of  “God of Vengeance” and the story of Asch’s emigration to the US from Poland her main story, while at the same re-creating the play. In 1907 when the play moved uptown, the producers cut the lesbian love scene that had been such a draw in the Village. Asch did nothing to protect his work, leaving his Yiddish theater troupe– which believed in the show passionately– high and dry.

“God of Vengeance,” as it turned out, became a hit for Asch around the world, and is still often performed– intact– by theater companies. But it’s Vogel’s imagining of the plight of the theater troupe back in 1907– as immigrants, remember, which is a huge part of this story from Poland to Ellis Island– that adds this riveting dimension. And then the production itself, directed by Rebecca Taichman, that transcends even the material. She and Vogel have added music– there is a lot of singing and beautiful choreography–and inventive production design.

In Yiddish “beshert” means “meant to be.”  This production is certainly “beshert,” an absolute must for a Tony nomination for Best Play if not the winner. And two featured actors who need highlighting: Richard Topol, who plays Leml, the heart and soul of the troupe, and Max Gordon Moore as Asch (and in one scene, Eugene O’Neill.)

Oh, and besides Mercedes Ruehl: the great director Julie Taymor, actor Bob Balaban and wife Lynn, Tovah Feldshuh, Joel Grey, Bill Irwin, Celia Keenan-Bolger, “Oslo” director Bartlett Sher, Molly Ringwald, and , surprisingly, Arianna Huffington, were among those standing and cheering at the end. Kudos to producer Daryl Roth. She brought “Indecent” to ‘Broadway’ but it’s at the Cort Theater, next to Fox News and News Corp, where this material would be banned in an instant if they had their way!