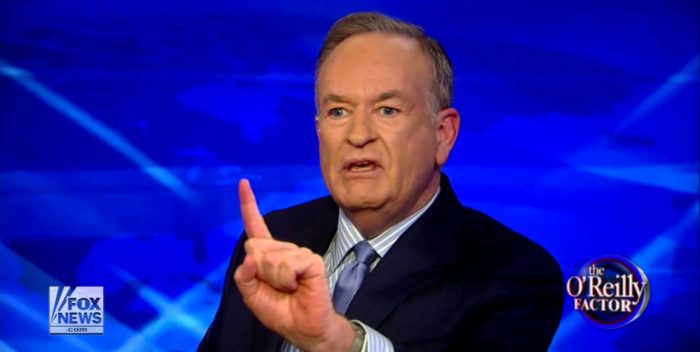 Bill O’Reilly may not get it. But he’s done at Fox News. Stick a fork in him.

O’Reilly had to issue his own defense today of a New York Times take out on the $13 million worth of settlements made for him on sex harassment claims. Fox News didn’t put out the statement. O’Reilly did, on his website:

Just like other prominent and controversial people, I’m vulnerable to lawsuits from individuals who want me to pay them to avoid negative publicity. In my more than 20 years at Fox News Channel, no one has ever filed a complaint about me with the Human Resources Department, even on the anonymous hotline.
But most importantly, I’m a father who cares deeply for my children and who would do anything to avoid hurting them in any way. And so I have put to rest any controversies to spare my children.
The worst part of my job is being a target for those who would harm me and my employer, the Fox News Channel. Those of us in the arena are constantly at risk, as are our families and children. My primary efforts will continue to be to put forth an honest TV program and to protect those close to me.

Fox, for their part, gave a weak tea defense to the Times: “21st Century Fox takes matters of workplace behavior very seriously,” the statement said. “Notwithstanding the fact that no current or former Fox News employee ever took advantage of the 21st Century Fox hotline to raise a concern about Bill O’Reilly, even anonymously, we have looked into these matters over the last few months and discussed them with Mr. O’Reilly. While he denies the merits of these claims, Mr. O’Reilly has resolved those he regarded as his personal responsibility. Mr. O’Reilly is fully committed to supporting our efforts to improve the environment for all our employees at Fox News.”

But what is that, really? Obviously not enough to satisfy O’Reilly, who felt he had to defend himself separately.

The Times story is not really new. Most of the $13 million was paid to Andrea Mackris in the infamous “loofah” case. She got between $9 and $10 million.. It’s an old story by now, swept away when the Fox News publicity machine got rid of it. But now it’s back and not by accident. It was one thing when anti-Fox stories were just the domain of New York Magazine’s expert, Gabriel Sherman. But now it’s the Times.

This is the way it goes: The US Attorney’s office in New York is investigating them because of the O’Reilly settlements. The Murdoch sons see the writing on the wall. O’Reilly is a dinosaur. Attacking Rep. Maxine Waters for her “James Brown wig,” then questioning her patriotism? Even for O’Reilly, it’s too much in prime time.

His time is coming to an end. The Times story is the bat signal. It’s a lot like what happened to Roger Ailes at Fox News. They defended and defended him. And then they didn’t. That’s when anti-Ailes stories starting showing up everywhere. And where is he now? Fox sees that Tucker Carlson succeeded Megyn Kelly without a hitch. Replacing O’Reilly is no longer than issue.