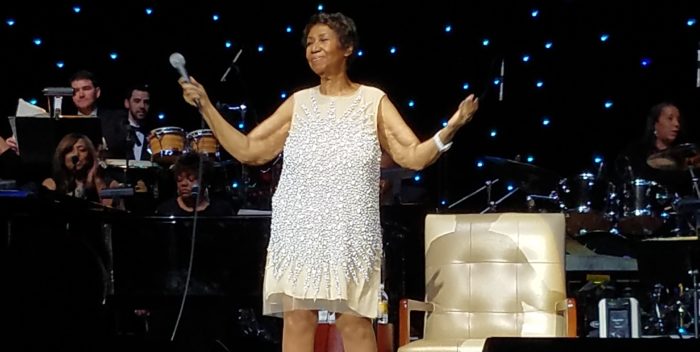 The Queen of Soul, Aretha Franklin, celebrated her 75th birthday in style last night at a sold out show at the Mohegan Sun arena in eastern Connecticut. Even though Aretha’s birthday isn’t really until tomorrow, the famed singer welcomed a bunch of friends from Detroit and  New York including music mogul Clive Davis. She toasted the crowd and pals by serving delicious lemon flavored birthday cake to more than 200 of the nearly 10,000 fans who turned out for the occasion.

It was a sweet night for the fans, too, who got to see a newly slimmed down Aretha recall the singer who came to prominence in the mid Sixties with hits that sounded as good as they did then including “Respect,” “Chain of Fools,” “Daydreaming,” “Baby I Love You,” “Do Right Man.” Franklin shimmied across the stage, warning the audience that she was getting over a cold. “So if I miss a note,” she pleaded, but the crowd roared back and frankly, if that’s how she sounds with a virus or an upper respiratory whatever, then it’s pretty damn good.

Backed by the largest configuration of her traveling orchestra, Franklin provided thrilling vocal acrobatics and jazz touches on the songs that elude singers half her age. She threw in some great ballads and mid tempo numbers, too, like ‘Skylark.’ and a sensational reading of “It’s My Turn” which she dedicated with special lyrics to Mr. Davis. She sang just one number, “Natural Woman,” from a lovely padded chair on stage, with power and range that were quite impressive.

But as usual Franklin’s best moments of the night came when she moved to the piano. A skilled natural musician, she led the orchestra through Jerry Butler’s “Brand New Me” and her signature number “My Cup Runneth Over” with skill and magnificent flourishes. The show ended with a rousing rendition of “Freeway of Love.”

Davis was there for many reasons, including their 50 year friendship. He was also there to discuss Aretha’s role in his upcoming mega concert set for April 19th at Radio City Music Hall, which will follow the opening night premiere of his documentary “The Soundtrack of Our Lives.” What will Aretha sing that night? I cornered the pair backstage after the show, but they were in deep negotiations!