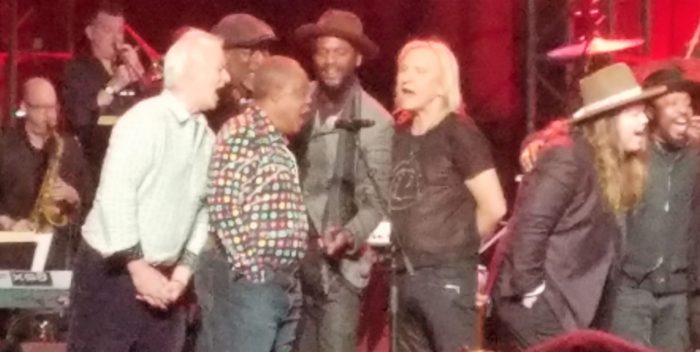 You don’t see the great Patty Smyth on stage every day. The rocking star of the group Scandal from the 80s married tennis great John McEnroe and took over a family of six kids. But she’s still got it, more than ever. Last night at the all star mega rock show at the Beacon for God’s Love We Deliver, Patty staged a performance of Led Zeppelin’s “Whole Lotta Love” for the records books. It was blistering and she was better than ever.

Only one problem. The announcer introduced her as “Patti Smith.” Uh, that’s someone else, as we know.

Our Patty was not pleased. She joked about it to the audience. But I’m told backstage, among the 30 or so stars stacked up to sing, she told off the stage managers. It didn’t help that she was joined on stage by a guitar playing McEnroe, who has a notorious temper. The long married duo did not stay for the big end of the show jam session when the 4-and-half-hour proceedings were over.

Otherwise, Love Rocks 2017, went off pretty well considering how long it was and how many people were involved. “Letterman” and “SNL” band star Will Lee was the musical director, Paul Shaffer shined on keyboards (he was great), legendary Steve Gad was on drums. Think of this: they were required to play blues, rock and R&B, everything from Motown to Van Morrison to ZZ Top to the Stones, Dylan, Beatles, Curtis Mayfield, BB King, and Joe Walsh’s “Life’s Been Good.” There wasn’t even a bathroom break!

Willis was the unofficial emcee. Murray showed up later for amusing pleas to donate money to the cause.

That wasn’t all. Lisa Fischer maybe stole the whole show with “Gimme Shelter.” She peeled the gold leaf painting off the Beacon’s walls. Anthony Hamilton and Russell complemented each other nicely on “Ain’t No Mountain High Enough.”

There was a lot of virtuoso guitar playing from Gary Clark, Jr, Billy Gibbons, and Trucks. Dr. John was astonishing on “Such a Night” given his permanent state of addled blues aristocracy.

There was no theme for the shoe particularly. Originally it was going to be a night of Sam Cooke songs, but the folks who control his music objected to that in the same week Aretha Franklin was saluted at Carnegie Hall. That made for a kind of blues-rock jukebox, but it worked in the end because the roster– including Mavis Staples, Cece Winans, William Bell, Keb Mo, Jackson Browne, the Blind Boys of Alabama, Aaron Neville, and Amy Helms (daughter of the late Levon Helms and songwriter Libby Titus) — were so exceptional.