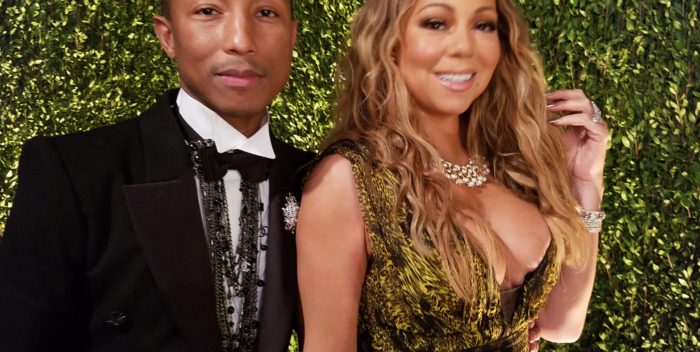 This is really real, and I hope Mariah Carey really reads it. I ran into her on Sunday night. We walked into the Vanity Fair Oscar party together. There was no one in the long entry tunnel but her, me, and her manager Stella Bulochnikov. Stella is not a day at the beach. She is tough. And I don’t mean that she’s a b—h. She is fiercely protective of Mariah. But it may be too much. Back to that meeting in a minute.

Yesterday — Monday– I caught word that Epic Records is very unhappy with Mariah. That recent single, called “I Don’t,” was a total failure. It was also a total surprise to Epic. They were sent the track all completed, with no forewarning from Carey’s camp that it was coming, I am told. They hadn’t heard it. “We were just told to put it out,” says a source. So they did. And it flopped.

Now my sources say Epic chief L.A. Reid is considering dropping Mariah from the label. In the time since she signed with him, Carey has had two singles– “I Don’t” and “Infinity.” They were not sellers, and didn’t get played on radio. There is no work being done toward an album, and no conversations are taking place between Epic and Carey’s team.

I wrote a few weeks ago that Carey’s friends and former employees felt that Stella had cut the singer off from everyone. Reid is apparently one of those people. “He can’t reach her,” says a source. “That’s really bad.”

When I ran into Carey and Bulochnikov, they were alone. I remember the days when Mariah was really attended to by Michael Richardson. Now it was just this pair. Mariah looked fantastic, I will say that. She is still very funny.

I was quite thrilled to see her, and I think the feeling was mutual. We talked about Nick Cannon and his current troubles. She said, “How would you like to be the only black guy on a show that’s all white?” We agreed Nick is a good guy and he’ll get through it.  I told Mariah no one knows how to get hold of her. Stella advised me to call her publicist. Mariah interjected: “I’ve known Roger since I was in diapers!” she exclaimed, and gave me an email she promised would work. (It didn’t.)

I told Mariah and Stella I’d seen a clip of her singing “Vision of Love” recently that was outstanding. Stella asked, “Why don’t you say that in your column?” So I’m saying it. I asked Mariah about a new album. She said, “We’re doing a series of singles. No one wants albums anymore. We have one now with this great rapper YG.” I’m not sure if she realizes “I Don’t” didn’t, and has come and gone.

Our time together was over. We turned a corner from the long entry tunnel, and arrived at the head of paparazzi line for Vanity Fair’s red carpet. Suddenly, Pharrell Williams and his producing partner Mimi Valdez, and they launched into a happy chat with Mariah. (Pharrell’s wife Helen was at home, recuperating from and adjusting to triplets!) She congratulated them on the births of their new triplets. “I have  my own feisty pair!” she declared, speaking of son Moroccan and Monroe (she loves those kids and she is so proud of them).

I don’t know what happened to Mariah and Stella after that. No one saw them at the party. I saw L.A. Reid across the room, but she wasn’t with him. (One of our associates got that great photo of him and wife Erica with Smokey Robinson, et al.) She could have just used Vanity Fair as  photo op.  Let’s hope that things get sorted out– and fast! Communication is always key.

Here’s that clip of Mariah singing “Vision of Love” on Jimmy Kimmel. I wish she’d made an album of great ballads like this, and give up the hip hop. We have no great theme album of Mariah showing off her voice on classics. Stella, this is for you: