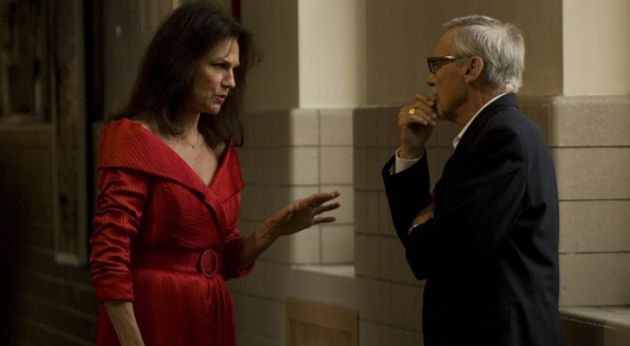 “The Last Film Festival” is ready, at last, to be released. It only took director-writer-producer Linda Yellen seven years to finish this labor of love. In 2009, while she was shooting, her star, Dennis Hopper, died suddenly. Yellen, a TV veteran with an Emmy Award for “Playing for Time,”  was in a bind. Hopper’s scenes were not completed, and he’s the star of this Hollywood satire.

Hopper plays Nick Twain, the down on his luck veteran producer whose unsaleable movie Called “Barium Enigma” has been chosen for the O’Hi Film Festival in Ohio (a distinct step down from the much tonier Ojai, California.) He’s convinced his ex wife Claudia, an Italian film star (a devilishly sexy and smart Jacqueline Bisset) not only to underwrite the film but come to one-horse O’Hi for what has to be the most embarrassing film festival in history.

There are plenty of Robert Altman-eque secondary and terciary story lines going on, featuring Joseph Cross as a young agent, JoBeth Williams as the mayor, Chris Kattan as a local undertaker named Harvey Weinstein, Agim Kaba as the movie’s young stud star with a secret, and Donnell Rawlings as a hilarious wannabe director and wounded vet. Leelee Sobieski also has a secret.

At a screening last night in Harvey Weinstein’s Tribeca screening room (unintentional), Yellen showed the movie to friends and to Kickstarter donors who’d been waiting to see the finished project. A couple of years ago, Yellen turned to Kickstarter to raise enough money finish the film. It was tricky since Hopper’s main story had to be fudged. Luckily, with help of a great editor, Yellen has pulled it off. Monterey Media is releasing “The Last Film Festival” on September 30th  in Los Angeles, followed by VOD and DVD.

Anyone who’s been to a film festival in a small town will want to see it. (It reminded me of a particular festival, but I won’t say which one.) Almost of all the O’Hi Festival takes place in the local high school. Yellen filmed at her alma mater, Forest Hills High School, in her own home, and her own 92 year old mother (only 85 at the time) is featured in one hilarious scene as a pot smoking judge. Quite a bit of it echoes Altman, who was one of Yellen’s heroes. (A scene set against a row of sinks in the cafeteria is sublime.)

One thing that’s instantly obvious about the difference in 2009– everyone uses flip phones. But they use them smartly, particularly Chris Kattan’s “Harvey Weinstein,” who wants to be a filmmaker.

As for Dennis Hopper, he looks great in the movie. Yellen told me he actually had the idea for the film, having been to many strange festivals. He told her, “You write it and I’ll do it.” So she wrote it. Hopper had had cancer, but thought it was in abeyance. Three-quarters of the way through the shoot he went to his doctor because he felt under the weather. Yellen told me, “The cancer had just spread everywhere.” He died soon after. But he and Bisset have great chemistry. She is particularly sharp. Sometimes the production quality flags– the movie was shot in 11 days, for peanuts— but the laughs are all there. Sometimes they are too close to home. But “The Last Film Festival” is very, very, funny.