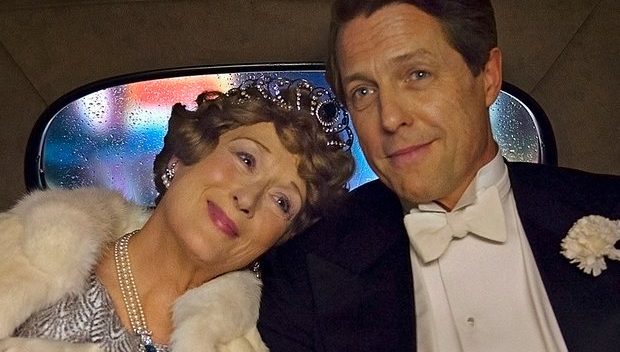 How cool is Meryl Streep?  She is down to earth, bawdy and fun, and even puts the extras first on a set. That’s  according to her “Florence Foster Jenkins” co-star Simon Helberg.  “The Big Bang” star recently told me that first off, everyone thinks it was shot in New York, when it was shot in London and Liverpool of all places.  Why the birth place of the Beatles? Simon answered, “The exteriors were shot in Liverpool because some of the buildings in the financial district in New York were actually built by the same architects who built some buildings in Liverpool, so it doubled perfectly. The film does looks gorgeous.”

Simon told me that Meryl was self-deprecating through out and was concerned about the extras, so she had the crew do something out of the box.  Simon explains,  “We shot at the Apollo Theater in London and there were hundreds of extras mostly playing serviceman piling in. She saw it was going to be a long day, so she asked if her and I could perform a concert for them off camera and get their reactions so they wouldn’t be tired by the time we were doing the concert on camera for them.  So we did and they basically had a private concert. She met as many as she could, chatted with them as well.”

Did her endless awful on purpose singing hurt his ears after awhile I asked?  Simon wisely answered, “Nothing she ever did or does hurts me.  Every moment with her is glorious.”

Speaking about Meryl being the coolest, we all remember her being the first to stand and  hoot and holler when Patricia Arquette gave her inspiring Oscar acceptance speech highlighting the discrimination and disparity of pay for working women.

Directed by Kamala Lopez and co-written by Lopez and Gini Sikes, “Equal Means Equal” just premiered in L.A. and NYC, was recently shown at the United Nations, The State Department, before members of Congress and at events throughout the country.  Elizabeth Warren purposely gave a plug to the film when she uttered the words,  “Equal Means Equal,” at the Democratic Convention. Last week it became available online on iTunes, Google Play and other digital platforms.  Much needed and looking forward to this timely documentary.  Check in out at:  http://equalmeansequal.com.