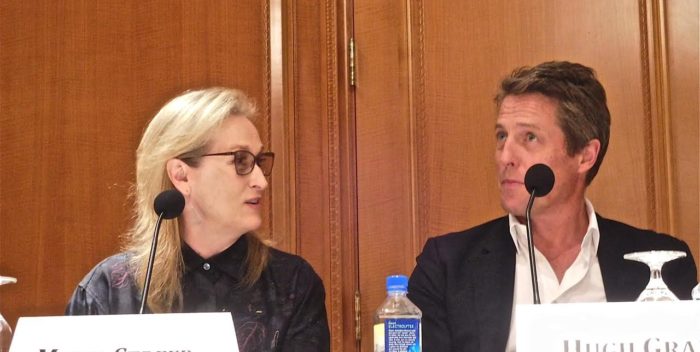 In “Florence Foster Jenkins,” Hugh Grant has the best role of his career as the loving but philandering husband of the real-life 1930’s New York society matron and aspiring opera singer, played by Meryl Streep.  Streep resembles Margaret Dumont from the Marx brothers’ films in a role that evokes equal part pathos and humor.

Grant was the guest of honor at a BAFTA event in a wide ranging conversation about his career, which took off twemty two years ago with “Four Weddings and a Funeral.”

The first question was about “Florence Foster Jenkins,” which opens Friday.

The BAFTA interviewer asked Grant, “You’ve been somewhat less of a constant presence in the last few years but this is a major part opposite Meryl Streep. What made you decide to do this particular movie?”

“Well you’re right. I was doing other things. I was doing politics. And I seemed to have a child a week,” Grant deadpanned. (He is a father of four from two girlfriends.)

Grant added, “But then Stephen Frears kept saying, ‘Let’s do a film.’ And I thought he was just drunk and then to my great surprise sent me a script that was genuinely funny and moving and I liked the sort of slight grotesque element of it. And it had this extraordinary, nuanced, complicated part for me, which is something that I’m not accustomed to,” said Grant, adding, “And there’s a small matter of Meryl Streep.”

Asked what his working relationship with Streep was like and whether they had to iron anything out, “No,” said Grant. “But it helped when I realized she couldn’t see me at all. She’s — I don’t think I’m revealing anything she wouldn’t reveal — she’s very short sighted [near sighted, in American],” Grant said. “She’s not wearing glasses in this film. And she doesn’t like to wear lenses because the camera can pick them up, so actually, even if you were Meryl Streep and I was Hugh Grant,” the actor put his hands two feet apart, “I could be Denzel Washington and she wouldn’t recognize me.”

Asked whether he could tell whether a movie script would turn into a good movie, Grant said he had that hunch when he read the screenplay of  “Four Weddings and a Funeral.”

“I certainly thought that when I read that script, that bizarrely brilliant script… I remember calling my agent and saying, ‘I think there’s been a mistake, you sent me a good script.’”

“That happened one more time in my career when they sent me ‘Jerry Maguire.’ And they said, ‘Sorry, it was a mistake. It was meant to go to Tom Cruise.”

One of Grant’s most bizarre roles was “Cloud Atlas” in 2012 by the Wachowski siblings. His roles involved multiple time zones, six characters and six hours in make up.

Explaining why he took the role, Grant said, “Well just that during this phase of really not doing many films, occasionally oddities come up that are just too fascinating to turn down. This one by the Wachowski brothers – now sisters – came up with this project… six characters in six different time zones and it was so fascinating.” Grant said actually he was to play five characters and he told the Wachowskis he’d do it if they gave him six.

“I didn’t enjoy sitting in makeup for six hours every day,” Grant complained. “I thought in five of the roles of the roles I was pretty good, but in one of them I was shocking. I thought I was very bad as the cannibal,” he said. “I remember standing on a mountain top, with no hair and tattoos, and I was supposed to lick my lips” at the prospect of eating a human being. To get motivated, Grant said one of the Wachowskis kept saying, “C’mon man, you’re like a panther, you’re really, really hungry!”

Someone in the audience asked Grant about his dancing scene in “Love Actually” (2003), where he plays the Prime Minister and dances in his executive quarters when he thinks no one is watching. Did he adlib the dance?

Grant peered out at the audience and put on his glasses. “I can see you,” he told the woman in the audience. “I’m the opposite of Meryl.”

“Yes, very much so,” Grant said about the famous dance scene in the film. “I pride myself on my choreography… in ‘Music and Lyrics’ I invented that dance that later became a sensation in the Far East,” said Grant, joking about the Korean dance craze Gangnam Style.

Grant went on to say that the dance scene in Curtis’s “Love Actually” was not “a fun experience.”

“He (Curtis) wanted me to rehearse it. I was too frightened so I kept making excuses. We never rehearsed it,” said Grant. “That’s not easy at 7 in the morning when you’re a cross middle-aged Englishman, wiggling your ass, stone cold sober. It was an appalling experience.”

As the end of the hour conversation, I asked Grant how he managed to keep his deadpan facial expressions while Meryl screeched or musical notes went flat, and he admitted it was a challenge.

“I did struggle. There’s a scene in that film where I have to be very fierce to people who are laughing at her at the concert,” he said. “I have to give them hard stares and tell them off but in fact I am absolutely” killing myself to keep from laughing.