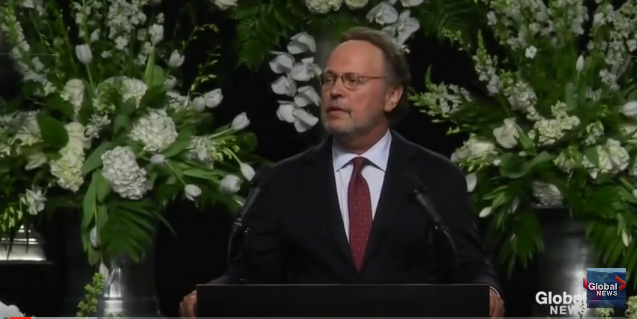 Billy Crystal is a known quantity here in the US and we love him. And you know he’s a big baseball fan, particularly a Yankee fan.

In Australia this month on a huge tour that also includes New Zealand, Billy used his love of sports to help Russell Crowe. At dinner with Crowe and his rugby team The Rabbitohs, Billy wound up giving them an inspirational speech about winning that would make even Casey Stengel proud.

Crystal– who everyone would like to see back hosting the Oscars– has sold out his tour Down Under. He’s also gotten incredible reviews and the folks there are loving since Billy hasn’t been to see them since touring “700 Sundays” in 2007.

In Brisbane, the reviewer Roger Hall wrote: “The American comedian’s warm, hilarious show is the best thing I’ve seen this year and this is one bloke who deserved the standing ovation he got in the Concert Hall at QPAC.”

Billy’s just finished touring New Zealand to raves, then heads back to Australia (he already conquered Sydney) on Sunday for six shows in Adelaide, Perth and Melbourne. You know he must love it there if he’s missing a huge chunk of the baseball pennant races that are developing!

Crystal starts work on the animated “Which Witch?” feature directed by Brian Henson and produced by Brian’s sister Lisa (they’re the successful children of the late Jim Henson) this fall.