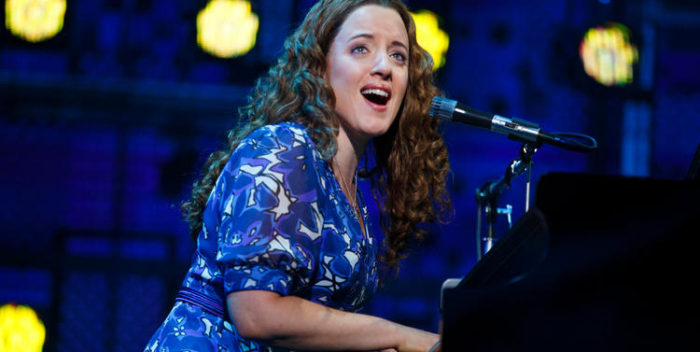 Carole King’s sister is crushing it as the Pantages in Hollywood. Well sister of the stage Carole–Abby Mueller, sister of Jessie Mueller, Tony award winner for Broadway’s smash, “Beautiful.” Abby Mueller has taken over the role for the national tour. On Friday night she wowed the packed opening rapturous crowd last night. The sisters are part of a veteran Chicago theater family, actor parents Roger Mueller and Jill Shellabarger and their two actor brothers Andrew and Matt, (Abby’s twin). They are what the NY Post cheekily coined, “the closest thing we have to the Von Trapp family.”

Abby proved to be up to the task in a gargantuan way, warbling Carole’s songs with pure heart and sheer vocal talent which earned her a five minute standing ovation. The rest of the cast all were equal to her brilliance. Douglas McGrath wrote the book, which shines the light on Carole’s early marriage and creative partnership with the now late Gerry Goffin, as well as the friendly rivalry between them and the also married songwriting team of Barry Mann and Cynthia Weil. The Manns, who where there last night, proclaimed Abby’s performance as “extraordinary.”

The locals had fun with Carole’s line that she was moving to LA after her divorce from Goffin, “a place called Laurel Canyon,” where she would write the classic “Tapestry” that prompted hoots from the audience which included Carole’s daughter Sherry Goffin Kondor, Cheryl Tiegs, famed director Stanley Kramer’s widow actress/producer Karen Sharpe Kramer and their daughter actress/director Kat Kramer, actresses Brooke Bundy and Carole Cook, Leeza Gibbons, “DWTS” Edyta Sliwinska, songwriter Diane Warren and more. (Speaking about the prolific and supremely sublime Warren, when are we going to have the musical of her life and her super stellar career? No brainer on that one, it would be an instant smash. Broadway theater producers… you listening?)

Back to the wonderful “Beautiful.” If you live in LA or visiting, you must see this production which runs through July 17th. And the Pantages has even more A list shows lined up; “Cabaret” is next, then “Newsies,” followed by “Hedwig And The Angry Inch” as well as performances by The Monkees, Willie Nelson and Alice Cooper and more. Next year, “The King and I,’ “Finding Neverland,” “The Bodyguard,” “The Book of Mormon,” and the smash “Hamilton.” Bravo Pantages for keeping Broadway Theater thriving in the heart of Hollywood. For now though, go see Abby/Carole and feel the earth move under your feet, (pardon the earthquake pun LA readers!)