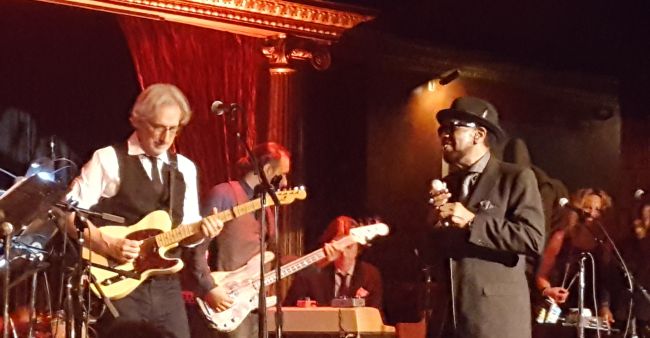 WILLIAM BELL had the first hit single on Stax Records with “You Don’t Miss Your Water (til the Well Runs Dry).” Now he’s 76, and let me tell you, most of today’s pop performers would give their AutoTune for Bell’s buttery baritone.

He’s still got it, every bit of it, and it was all on display last night at Chris Noth’s Cutting Room. The place was packed, too, with Roseanne Cash, Mary Kay Place, the Eagles’ Timothy B. Schmit, singer Vaneese Thomas (dad was Rufus) and famed producer Russ Titelman among the guests.

Cash’s husband, Jon Leventhal, produced the great new album and leads the band. Did you know Bell co-wrote (with Booker T. Jones) the much covered Albert King hit “Born Under A Bad Sign”? They rocked it out last night and gave the whole room the shivers. Real music still lives!

Oh yeah PS: Timothy Schmit, who sang the great Eagles hit, “I Can’t Tell You Why,” will have a new solo album out before the end of the year, he tells me. Good news.

ANDREA BOCELLI  is doing what he can to honor Muhammad Ali. From now until June 13th, he’s raising money via a special auction Ebay Italy for Ali’s Celebrity Fight Night in Italy.

The auction will last until June 13th and will offer the occasion to take part in two exclusive nights during the Celebrity Fight Night in Italy 2016 on September 9th and on September 11th and share the same table as Andrea, together with his other celebrity friends.

All the money raised will be allocated to the Andrea Bocelli Foundation and the Muhammad Ali Parkinson Center.

At the following link you can find the information to participate in the auction that you can share with your contacts:

First lot – White dinner at Bocelli’s table in his villa – on eBay.it from June 3rd to 13th

On auction are two invitations for the white dinner of September 9th under the Tuscan stars. The event will open with a welcome cocktail at the Teatro del Silenzio, situated in the Tuscan hills near Pisa. After the cocktail, the dinner will be served in the inner garden of Andrea Bocelli’s villa, called “Poggioncino”, in Lajatico always in the province of Pisa. Two seats at the Maestro’s table will be reserved for the winners of the auction. At the end of the night the tenor will perform, accompanied by some of his artist friends, for a private concert reserved for 250 people. To bid: ebay.com/bocelli

On auction are two invitations to participate in the Gala night on September 11th with a Red Carpet moment at Palazzo Vecchio in Florence. Cocktails will be served inside the historical building and the dinner will be held at the Salone dei Cinquecento. Also in this case, for those who will win the auction, two places at the Tenor’s table, together with his other celebrity friends, will be reserved. At the end of the dinner, Bocelli will perform accompanied by the Orchestra del Maggio Musicale Fiorentino conducted by Maestro Zubin Mehta, with the participation of other artists at an hour long concert for 350 people present in the Salone. To bid: ebay.com/bocelli