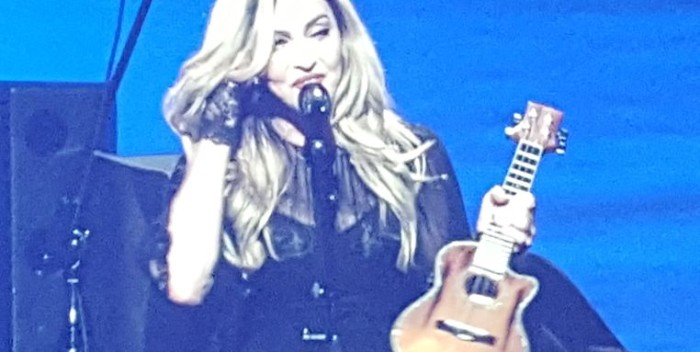 What is Madonna doing? She’s pouring fat onto the fire as they used to say. She’s using social media to antagonize her 15 year old son Rocco and his father Guy Ritchie.

This past week, a New York judge ruled that Rocco should stay in London and in school. The kid is happy there. Madonna, it should be pointed out, is on a worldwide tour. Maybe Rocco just wants to be in a house with people and a school with friends, and be a teenager. Maybe he doesn’t want to go from city to city with the “Rebel Heart” tour. He has that right. The tour has been going on since September and doesn’t end until March 20th in Australia. There are reports that she sang “La Vie En Rose” the other night in relation to Rocco. That’s kind of ironic since she sang it in January for ex husband Sean Penn at his Haiti fundraiser in Los Angeles.

Madonna, however, won’t stop. She posted this eerie clown video over the weekend:

She also posted this vulgar cartoon, suggesting that she’s got some thing on Ritchie. Rocco uses social media. He can see this. But Madonna doesn’t seem to get it.

Knowledge is Power 📚. This is Art! By Harukama Namio Japanese illustrator. One of my favorites. It has nothing to do with my ability to be. A Good parent get off my account judgmental ignorant sexist literal un educated uncultured women hating idiots with no sense of irony or humour.