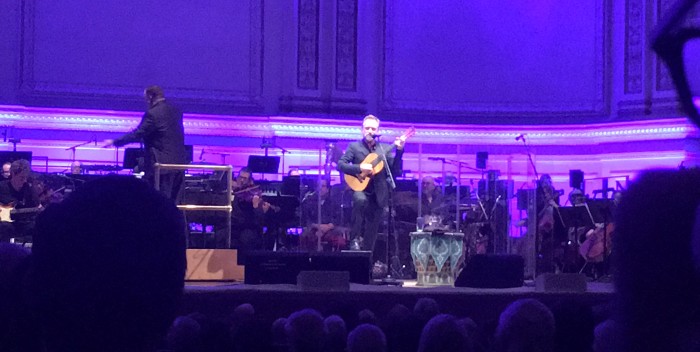 Sting dedicated his “Symphonicities” concert at Carnegie Hall last night to his manager, Kathy Schenker. He shocked some of the audience that after 38 years, the beloved Schenker was stepping aside. No, she’s not sick and she’s not old. But she wants to have her life back after hundreds of successes. Martin Kierszenbaum, who recently left Interscope Records at Interscope, will take over, with Schenker’s staff otherwise staying in place.

“Sting is bereft,” a friend said after the Carnegie Hall show. “He said Kathy leaving was like losing a limb.”

So it was a night of last and first: this was Sting’s first ever proper Carnegie Hall performance even though he’s done the Rainforest Foundation concert there 21 times, and appeared in various other charity events. His “Symphonicities” show was to benefit Carnegie Hall on its 125th birthday. Among the honored guests were Robert DeNiro and Grace Hightower. Mrs. Sting– Trudie Styler– wore a gorgeous green gown with a train. (She’s busy editing her directorial debut, “Freak Show.”)

Chris Botti joined Sting and the Orchestra of St. Luke’s for Frank Sinatra’s “In the Wee Small Hours.” Sting returned the favor by heading downtown to the Blue Note Jazz Club later and joining Chris for the first of his 26 dates at the famed Village nightclub.

Was the show a success? After ninety minutes of gorgeous singing and symphonic music floating through Carnegie Hall, the audience went crazy for an encore. They’d heard orchestral-jazzed up versions of “Roxanne” and “Every Breath You Take,” “The Last Ship,” “When We Dance,” and so on.

A planned encore of “Desert Rose” turned into such a rave, that when Sting said good night– and everyone left the stage– the audience didn’t move. What to do? Sting and co. improvised on an acoustic version of “Message in a Bottle.” The sold out room sang along to “sending out an SOS,” as the orchestra freelanced some back up. Quite a feat. Quite a night.

On a personal note, I’ve known Kathy Schenker since the Civil War or thereabouts. One of the great great people anywhere, she’s been such a great friend. How dare she try to have a real life! Everyone sends her a lot of love and luck on her Eat, Pray, Rock adventure!