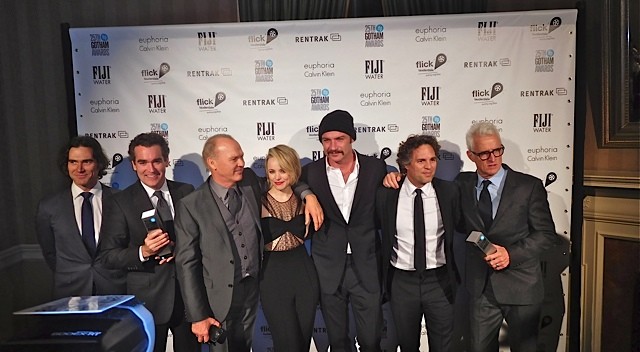 “Spotlight” directed by Tom McCarthy won the Gotham Awards tonight. Thus the saga of Boston Globe reporters who shook the Catholic Church to its foundations began its deserved run to the Oscars. McCarthy won Best Screenplay as well with co-writer Josh Singer, and the movie was awarded a special citation for its ensemble work. “Spotlight” is a slam dunk for SAG Best Ensemble in January, too.

It was a star studded night, with Robert Redford and Helen Mirren each getting lifetime achievement awards. Dan Rather presented to Redford, and Tom Brokaw (with wife Meredith) was at the main table, along with Glenn Close and Robert DeNiro, and Mirren’s husband, director Taylor Hackford.

The Audience Award was voted for on-line by IFP members.

For Breakthrough Actor, presented by Sarah Paulson and Michael Shannon