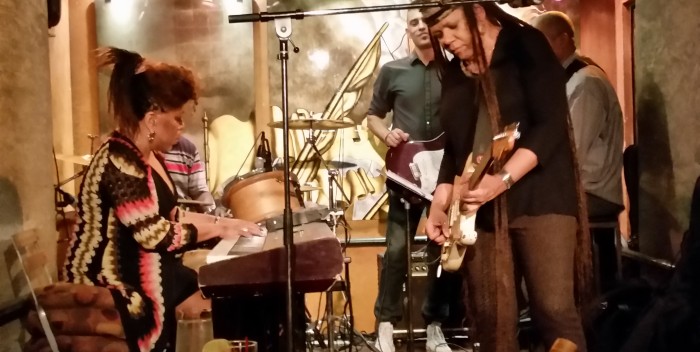 If you don’t know this already, Ashford and Simpson’s Sugar Bar on West 72nd St. is the place to hear great live music.

Last night, superstar guitarist Felicia Collins of Paul Shaffer’s Letterman band fame played a blistering set of blues numbers, some she wrote, and one new one– a collaboration with Valerie Simpson. You know Val and late husband Nik Ashford wrote all the great Motown hits like “Ain’t Nothing Like the Real Thing” and “Ain’t No Mountain High Enough” as well as “Solid (as a Rock)” and so many more!

Turns out Felicia cannot only play the guitar but she can saing, as Rufus Thomas would say. She and Val debuted “Code Blue,” the first real song Simpson has attempted since her collaborator and life partner/husband Nik passed away two years ago.

It’s a hit, don’t cha know. (Keep refreshing as I try to embed a clip)

Felicia has a mini album out you can get on her website.
Here’s a taste that I found on You Tube:

Felicia and her band come back to the Sugar Bar in December. In the meantime, I hope she tours. And I thank them all, including the great Tee Austin, for letting me hear some real music. It wiped clean that mess from Sunday night on MTV. Those kids should trying listening…’cause ain’t nothing like the real thing.

Oh and thanks Felicia’s mom. She missed “Code Blue” the first time they did it, so they had to do it again!