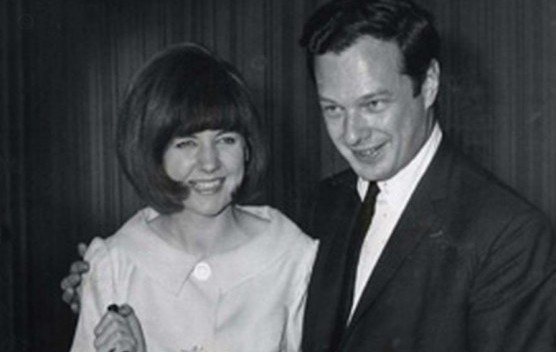 The Beatles’ close friend – Cilla Black – who became one of Britain’s most successful singers and most beloved TV personalities over the past 52 years, passed away this week.

Our friend, producer/writer Martin Lewis, has written this tribute to Liverpool’s First Lady.

The world has lost Cilla Black at a very young 72. Under the loving guidance of Beatles manager Brian Epstein, she was a hugely popular singer in the 1960s – both in her native Britain and in most of the world (except sadly for the USA.) And – instigated by Epstein’s belief in her talents and vivacious personality – she then had a four-decade run as a top TV personality in Britain. She hosted her own variety show, several game shows and dating shows and became one of the nation’s most beloved entertainers. As cherished in the UK as (by way of comparison) Carol Burnett is in the US.

Famously she was discovered by the Beatles. She was the cloakroom attendant at Liverpool’s Cavern Club in the very early 1960s where they first made their name. She was adored by all four Beatles as a pal and as a singing talent. It was John who encouraged Epstein to manage her. Until then Epstein had only managed groups and one or two male singers. Cilla was the only girl he ever managed, and she rapidly became second only to the Beatles in his affections.

Epstein arranged for her recordings to be produced by George Martin. Like several of the Epstein stable of artists, she had the benefit of receiving original Lennon-McCartney tunes to record. Two of Paul’s early ballads that did not suit the Beatles’ own musical style – “Love Of The Loved” and “It’s For You” – showcased her vocal skills and gave her UK chart hits. Shortly before Epstein died of an accidental overdose in August 1967, he set up for Cilla to have own BBC TV variety show. (Ringo was one of many guest stars on the show). Paul McCartney immediately crafted the perfect theme song for her – “Step Inside Love” – which captured her warmth and infectious Liverpudlian charm. It became her signature song.

Her vocal skills also attracted the respect and affection of Burt Bacharach. In late 1963, Epstein and producer George Martin had encouraged Cilla to cover the Bacharach-David song “Anyone Who Had A Heart” which was just breaking big in the US. It took off like a rocket in the UK trouncing Dionne Warwick’s original to top the UK charts and eventually sell over a million singles. (In a nation of just 53 million.) Which did not please Warwick. However Bacharach was more sanguine about it: 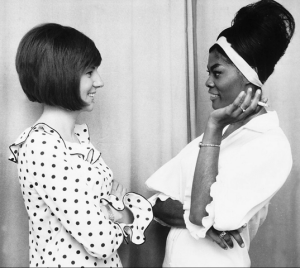 Cilla Black and Dionne Warwick meet up in 1964!

“There weren’t too many white singers around, who could convey the emotion that I felt in many of the songs I wrote but that changed with people like Cilla Black…”

The extent of that respect manifested itself in late 1965. There was a new British film due to be released in 1966 titled “Alfie”. The movie had a superb jazz score by Sonny Rollins. But the distributors shrewdly felt that a title song might help promote the film and commissioned Bacharach & David to write what became the iconic song – albeit played under the end credits rather than the opening. Burt and Hal naturally thought of their pal Dionne Warwick to record the song but understood that such a quintessentially English film demanded an English vocalist and so Cilla Black was engaged. She and Epstein then requested Bacharach’s active participation in the recording and Burt made the trip to London for the session. He played piano on the track, created the orchestral arrangement and conducted the 48-piece orchestra while George Martin produced.

No disrespect to Dionne Warwick’s later superb version or to the numerous other covers – but Bacharach is right about Cilla: “There are moments in that song that she really grabs your heart…” Nothing else quite touches the sensitivity of Cilla’s stunning delivery of that lyric and its expression of the feelings of the many girls beguiled and wounded by Michael Caine’s “Alfie” character… (One of whom incidentally was portrayed by McCartney’s then girlfriend, actress Jane Asher.)

(For the film’s US release, the distributors disregarded Bacharach’s opinions, callously junked Cilla’s recording, then chose Cher to record the song for the closing credits! “Using Cher was done over my dead body!” Bacharach told me in a private conversation 25 years ago.)

I was fortunate to have a few encounters with Cilla over the years, and she was as engaging and vivacious in-person as she appeared on the screen.

In October 1990 I was bringing Cilla to Los Angeles to perform at a tribute dinner to Michael Caine that I was co-producing. My idea had been to have the song “Alfie” rewritten as a tribute to Caine. I asked Michael if he would be happy to have Cilla perform for him and he was most enthusiastic about that.

(At that time Burt was having a bit of a ‘bumpy patch’ in his relationship with Hal David so he requested that I didn’t involve Hal in the pastiche rewrite. I asked him I could approach Sammy Cahn to come up with a new lyric. Burt agreed and I managed to persuade Sammy to undertake the honors. Sammy of course wrote wonderfully funny lines for Cilla to sing about Michael. Cilla was – using a very Liverpudlian expression – “dead chuffed” [extremely happy] that she would be singing new lyrics by Sammy Cahn.)

Alas – the day before Cilla was due to fly out for the event, her eldest son Robert was in a car accident and Cilla phoned to say that she couldn’t make the trip. Michael and I were very disappointed but of course we understood. (In the end I managed to draft in a couple of my other pals at very short notice – the delightful Patti Austin accompanied on piano by dear, sweet Dudley Moore – and they did an outstanding job). But Michael and I both missed Cilla on that grand occasion. It would have been her first performance in the USA since a short cabaret season at New York’s Plaza Hotel that Brian Epstein had arranged for her in 1965.

‘Anyone Who Had A Heart’ fell in love with Cilla. She entranced with her singing, embraced and enchanted with her personality and girl-next-door charm. She was a worthy successor to Gracie Fields as Britain’s sweetheart and national treasure.

Incidentally – Cilla was also a full-throated champion of the world remembering and honoring Brian Epstein’s huge contributions to the success that she and the Beatles enjoyed. And she fully supported my 15-year campaign to have Brian Epstein inducted into the Rock and Roll Hall of Fame – which the Hall very belatedly did last year – a mere 28 years after he became eligible.

when you leave me, say you’ll see me again
for I know in my heart, we will not be apart
and I’ll miss you ’til then
we’ll be together now and forever
come my way
step inside love – and stay…