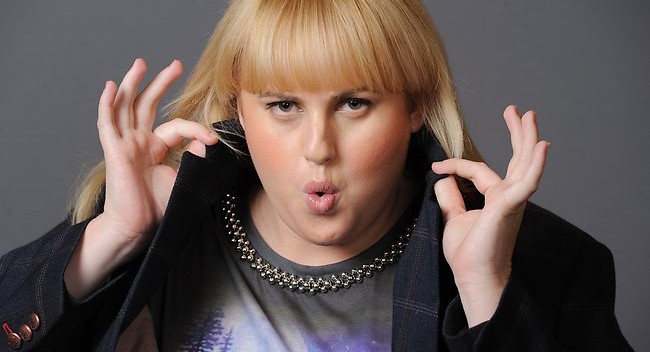 Rebel Wilson– who’s very funny and now a star from “Bridesmaids” and the “Pitch Perfect” movies–has a jealous frenemy back home in Australia. Someone she went to school with has declared that she’s 7 years older than she’s claimed in the press, that she changed her name, and — this is the worst– “wasn’t funny”– back in high school.

Who cares, really? But Rebel isn’t alone when it comes to Hollywood stars who’ve changed their back stories on their rise to fame.

I went to college with a comedian/actor who wasn’t humorous at all when I knew him on campus. But he found a gimmick that finally brought him to New York, and fame, about 15 years after I’d last seen him. I knew we were the same age, but suddenly this guy was several years younger. And people were laughing at his jokes! I still can’t understand it.

For a while he got away with the age change. They always do at the start. Then time catches up, or as in Rebel’s case, an old classmate speaks up. Now, of course, the internet provides a rude reminder. Before the web, a celebrity could easily cover up their past. Now it’s a little trickier.

Back in 1995, when I was at New York Magazine, a popular girl on the town was giving a lowball number for her years on Earth. She was also tied to a hit TV series about younger gals. Someone tipped me off, which resulted in a phone call for proof. The lady in question faxed (that’s what we did then) over her passport page– and clearly the year of birth had been “whited out” and replaced with a new one– different font! LOL, I might have said, had we known how! Now that was funny!

I don’t blame Rebel Wilson at all for changing her age. First of all, she came here from Australia. How long does that take? Like, years. It’s really far away. Second, she knows America embraces youth. Getting a late start around here is not appreciated. So, whatevuh. She’s lovely, and funny. Age is a number, but it’s not a state of mind. And remember, everyone loves Tony Bennett and Betty White.

PS I had lunch last Friday with the legendary Liz Smith and her friend (my friend, too) the famous archeologist Iris Love. Liz is 92, Iris is “of an age.” We had such a good time, laughing for two hours. There aren’t two sharper or more up to date women in New York. They like their margaritas, too!