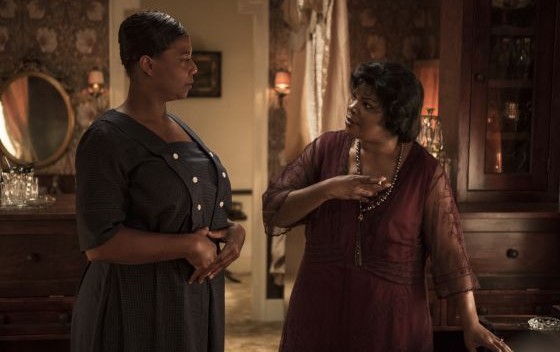 And she came to the premiere looking like a million bucks and acting serene and lovely. That was Mo’Nique, Oscar winner and more recently participant in a fencing match between herself and Hollywood. Mo’Nique co-stars as blues singer Ma Rainey in HBO’s “Bessie,” in which Queen Latifah gives the performance of a lifetime. This is the Emmy movie of the year come September. It’s just phenomenal.

Queen Latifah– already beloved, hard working, a fabulous singer. When you see her as Bessie Smith she blows your mind. She gets quite naked, as well, which I know will attract attention and headlines. It’s very much part of the story of Bessie’s rise and fall and return.

Before we had Aretha-Gladys-Patti-Diana, or Whitney-Mariah-Madonna, there were the original divas, the women of the blues–Bessie Smith- Ma Rainey- Ethel Waters. This last group was just as contentious, full of fun and drama, lived life large, made headlines etc. Bessie had a voracious sexual appetite fueled by an abusive childhood. She was shocking, loud, stunning, poignant. Queen Latifah will win the Emmy for making Bessie Smith come alive for a new generation. She’s awe inspiring.

And then there’s Mo’Nique. She plays the calm in the storm of these women, the complete opposite of “Precious.” She is all heart as Ma Rainey, who was Bessie Smith’s mentor, guide, and friend. as Latifah explodes like fireworks and Khandi Alexander plays out cruel games with Smith as her older sister, Mo’Nique– of all people– brings compassion to the story. She’ll pick up Best Supporting Actress at the Emmys without fail.

I spoke to Mo’Nique and her husband Sidney Hicks at length following the screening. (Paula Schwartz will have more on Thursday with Monique from the red carpet.) This was not the garrulous Monique of the “Precious” campaign. Her hair was done beautifully and she wore a gorgeous blue gown. The Hickses are not looking for a fight. But I think they are also not looking for acceptance in Hollywood. They just want to do their work and be compensated. In short, they are not interested in the bull-shit.

But here’s Mo’Nique in her first real role since the Oscar. (She and Sidney produced an indie movie, as well.) Don’t we make exceptions for really organic geniuses? Look, Brando was no fun. Bette Davis didn’t want to have tea with you. I’m sure Paul Robeson wouldn’t have done junket press. Mo’Nique has a gift. And you know, she knows it. She’s going to give a phenomenal performance and not want to talk about it. What can you do, really?

At the sensational after party at the Edison Ballroom (following the screening at MoMA), Mo’Nique and Sidney made an appearance. They had a little dinner in a small alcove, took photos, and slipped out. We won’t see them again until the Emmys, and that’s maybe.

Dee Rees is the young black woman who wrote and directed “Bessie.” She previously made a very good film called “Pariah.” She is now officially a talent to watch. Let me also praise the men of “Bessie.” This is no chick lit, by the way. It’s a movie. Mike Epps, Michael Kenneth Williams, Tory Kittles and Charles Dutton all deserve kudos. There are a couple of memorable cameos from Bryan Greenberg and Oliver Platt (wow). Tika Sumpter is a standout as Bessie’s long suffering lover.