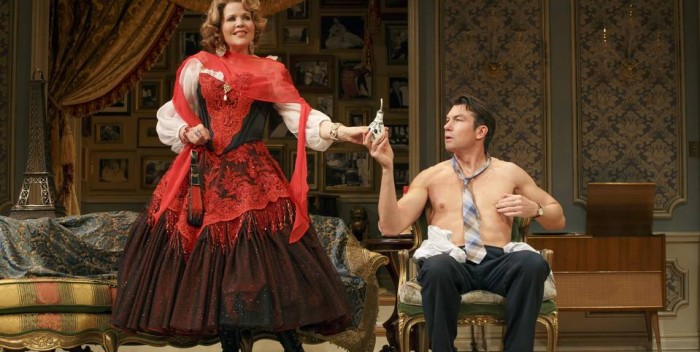 Sunday night, “Fun Home” opened at the Circle in the Square after a heralded run downtown at the Public Theater. Jeanne Tesori’s gem of a drama with a music (not a musical comedy, to be sure) is sad, brilliant, and disturbing.

Juxtapose that experience with “Living on Love,” with opera star Renee Fleming making her Broadway debut in a comedy that’s not a musical but has some music in it– namely, Fleming singing some bits of opera as a fictional famed diva married to an Italian conductor/ladies man.

I’ll tell you what. After “Fun Home,” I needed a laugh. (I recommend seeing these shows back to back, too.)

And “Living on Love” has plenty of them. It’s not terribly sophisticated, but it’s an interesting idea. Joe DiPietro has taken an unfinished play from the legendary writer Garson Kanin and reimagined it. Kanin wrote his play in 1985 before he became ill. His play, called “Peccadillo” was performed in Florida with a cast that included Glynnis Johns as the Diva, Christopher Plummer as the Maestro, and a young Kelly McGillis as the editor who comes to push along the Maestro’s memoirs.

In the new production with a different title, Anna Chlumsky from “Veep” plays the editor, and Jerry O’Connell is the ghost writer who’s hired to help get the book done. Kathleen Marshall, who usually directs musicals so beautifully, guides this comedy with music expertly and gets a lot of fun out of the material. Chlumsky and O’Connell are very natural and winning, Fleming lights up the stage, but the real winner is Douglas Sills as the Maestro. Don’t know his name? He played The Scarlett Pimpernel on Broadway many seasons back. With crazy flying grey hair (his own, by the way) and almost intentionally bad Italian accent, Sills is a hoot as the Maestro. The whole group makes for a truly fun ensemble.

I did enjoy DiPietro’s changes to “Peccadillo,” placing the whole thing around 1955 with gossip about then current stars and wisecracks about Leonard Bernstein. That was a clever move. Great set by Derek McLane, excellent lighting by Peter Kaczorowski.

What I don’t get is why producers bring these shows in during Tony nominations. I hope “Living on Love” gets a good run, but it seems like a fall opening would have been smarter, when the competition isn’t so intense. This is a lovely sort of throwback theater.

PS Enjoying the premiere: Phil Donahue and Marlo Thomas, as well as “Mrs. C” from “Happy Days,” actress Marion Ross, who flew in from Los Angeles to support her pal, DiPietro. Also spotted: Tyne Daly and Montego Glover, on a night off from their new comedy, “It Shoulda Been You.” At the party at Sardi’s, I ran into designer Cynthia Rowley who was hanging with O’Connell’s gorgeous wife, Rebecca Romijn.  Matthew Broderick also popped in from “It’s Only a Play,” after his show was done for the night. And Oscar winning director Rob Marshall (“Chicago,” “Into the Woods”) was there to support his director sister Kathleen.