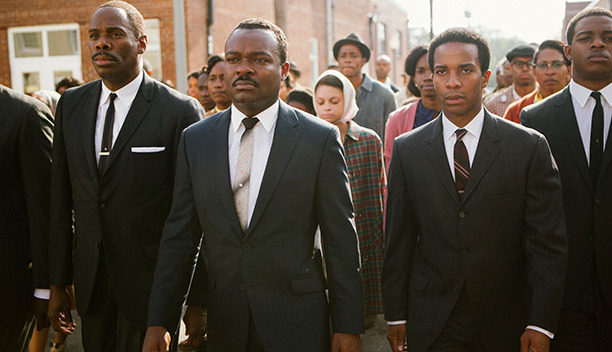 “Selma” director Ava Duvernay posted this to Instagram earlier Tuesday. I’m reprinting it here. Duvernay, her family and the cast were welcomed on Friday to the White House by President and Mrs. Obama for a screening and a reception.

“Here is a small note that they will never see, but I must post it anyway. Projecting a film that I made with my comrades in the White House for the President and the First Lady – for THIS President and First Lady – was as stunning an experience as I’ve ever known.

The first film to ever screen at the White House was “Birth of a Nation” or as it was previously titled “The Klansman.” That was in 1915. Last Friday, “Selma,” a film about justice and dignity, unspooled in that same place in 2015. It was a moment I don’t have to explain to most. A moment heavy with history and light with pure, pure joy all at once.

President Obama’s introduction of SELMA in the presidential screening room, the quality time he and the First Lady took with us before and after, the stories he shared with my editor and cinematographer, the praise she gave our dear cast, the handshake he gave my father, the hug she gave my mother, the laughter, the smiles, the extra time they gave us all long, long, long beyond when we were scheduled to go, the warmth, the respect, it was just beyond exquisite.

“I’m proud of you,” she said to me. “We’re proud of you,” he added. I’m proud too – of them, of us, of the film, of this moment in my life. Who knows what lies ahead. But what has already occurred is food and fuel and fire and freedom. To President Obama and First Lady Obama, it was a dream I never dreamt, a dream seared in my memory like a scar from a fight won. The kind you look at every now and then, and just nod and smile. I thank you. xo.”