Annie Schulhof isn’t just busy dictating who wins awards from the National Board of Review this week. Her family company, Quadriga Art, was ordered to pay the US government $24.6 million in the settlement of a major fraud case that went on for years and concluded this summer. The case against Quadriga was cracked open on CNN’s AC360 by reporter Drew Griffin. The original video from 2011 is here:

Annie’s husband, Tom, who negotiated the Quadriga contracts and was chairman of the board of directors, was forced to resign as part of the deal.
The government won the case because Quadriga, a direct mail operation, had been bilking a new veterans organization for millions since 2007. The charity, called Disabled Veterans National Foundation, hired Quadriga to solicit donations. Quadriga was very successful. 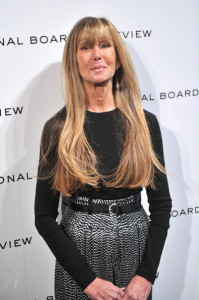 But then DVNF turned around and paid most of the money that came in back to Quadriga. For example, on its most recent Form 990, DVNF said it spent over $17 million of $27 million in expenses on direct mail campaigns. Only $48,000 in cash went to two organizations that help vets.
In the filing from the Attorney General of New York, Quadriga and its offshoots is cited for raising $115 million total for DVNF, and receiving 90% it back in fees.

Quadriga (and its many other entities) is owned by Annie and Tom Schulhof’s nephew, Mark. The parent company is called RBS Direct Marketing. Among their other victims, besides veterans, is an animal rights group called SPCA. Here’s the AG report: http://www.ag.ny.gov/pdfs/DVNF-Quadriga-Convergence-AOD_14-145.PDF  It’s a doozy of a read. (Maybe this is why the NBR liked “American Hustle” and “Wolf of Wall Street” so much.) Meanwhile, Quadriga– which is now prevented from doing business with start up charities until 2019– has deleted its website. But RBS continues under various names (except of course Royal Bank of Scotland).

Look for NBR winners, as usual, to be heavy on Warner Bros., “American Sniper” and Clint Eastwood. No George Clooney movie this year. But they will figure out a way to get him there. They’re looking for big studio winners to purchase lots of tables at their phony-baloney dinner in January. Paramount and Fox are their other pigeons with fat wallets. I could see “Interstellar” doing very well with Schulhof, also because it’s half-Warner Bros.

As the movie biz breathlessly awaits annual awards next Tuesday from the fan-based National Board of Review, here is a startling new scandal to go with the old one.

As I told you last month, a group of NBR board members who’ve been “fired” have asked the New York State Attorney General’s office to investigate malfeasance in the organization.

Here’s an update: You may recall a few weeks ago I reported that the board of directors of the NBR now included Berkeley, Calif., psycho (and sex) therapist Daniel Goldstine.

You’ll be pleased to know that Dr. Goldstine, whose connection to the movie business is being on the board of the Pacific Film Archive, also has a conflict of interest. His son is Josh Goldstine, head of creative marketing for Sony Pictures.

He is not, we may conclude, a disinterested party in who gets the NBR’s top awards. The Goldstines are said to be close friends of the current NBR president, Annie Schulhof and her husband, Tom, brother of former Sony chairman Mickey Schulhof.

This would account for last year’s civil war among the NBR leaders over giving the top movie of the year to Miramax’s “Finding Neverland” or Sony/Columbia’s “Closer.” The former won. The latter had to settle for Best Ensemble Acting, an award that other groups like the Screen Actors Guild gave to “Sideways.”

“The larger group wanted ‘Finding Neverland’,” my source says. “But Annie pushed hard for ‘Closer’. It was a fight.”

Closer, directed by Mike Nichols, while having many fine characteristics, was not even nominated for an Academy Award in the long run. “Finding Neverland” was nominated in several categories.

The NBR has been never been a totally “clean” organization. “It’s believability has always been questioned,” says a former member. But Schulhof has turned out to be its most controversial and polarizing leader, appointing friends to the board, giving her veterinarian free ads in the group’s annual fundraising book and turning the place into one of even more secrecy and clique-ishness.

I doubt, for example, that the general public realizes only 12 people select all the winners of the NBR awards. Schulhof, according to sources, runs the elite, Skull and Bones-like Exceptional Photoplay Committee with an iron fist, making sure it’s stocked with her cronies like Inez Glucksman and Keith Edwards.

Though the NBR attends hundreds of screenings, dines with stars and directors, has personal Q&A sessions with them, in the end, I am told, it’s Schulhof and her Gang of 12 who make the final decisions.

All this should be interesting, since Sony/Columbia’s “Memoirs of a Geisha” — a certain Oscar nominee and potential box office hit — has become a hot potato with the NBR. “The group didn’t like it so much,” says one insider, “but Annie will fight for it since it’s Columbia.”

Sony is also represented in this year’s Oscar race by “Capote,” a Sony Pictures Classics release thanks to the merger with MGM/United Artists.

Sony, however, is not Schulhof’s only favorite studio. Warner Bros. is very dear to her, I am told, thanks to a close friendship with longtime Warner exec, Dan Fellman. Warner’s big Oscar movie this year is the well-reviewed “Syriana,” starring George Clooney.

“Annie told several people that ‘Syriana’ was going to get something before it was even shown,” a source tells me. “She said if nothing else, it would win the Freedom of Expression award.”

Last year, Warner’s was an NBR favorite with Clint Eastwood’s “Million Dollar Baby” and Martin Scorsese’s “The Aviator” receiving many citations. Eastwood has also been an NBR favorite in the couple of years.

Even though the Fellmans and Schulhofs are indeed close personal friends, it’s unlikely that Dan Fellman would have made any overt suggestion to Schulhof about getting awards.

But Annie Schulhof may be doing favors on her own without being asked for her friends in the movie business. She’s recently started a production company, Pipedream Films, and has hopes, I am told by sources, of becoming a “player” in the business.

Meantime, I have cleared up one NBR mystery. I’ve reported in the past that inexplicably the not-for-profit group says it spends over $100,000 on “screenings” even though the studios treat them to the screenings. The NBR nevertheless lists the expense that way on their federal tax filing. But Leon Friedman, the group’s attorney, told me yesterday that in fact the $100,000 is for salaries for three NBR employees. Why not list it that way?

“In the past, those people were freelance,” says Friedman. “Now they’re paid and the next tax filing will reflect that.”

But there are clear lines on the Form 990 tax form for salaries and wages even if the people employed are freelance. Less generous types might think the NBR has lied to the Internal Revenue Service for the last several years.

More news: the next tax filing will also reveal that the new group’s newest staff director is getting at least $75,000 a year to screen movies and keep the peace between the 160 or so members and the 12-member Photoplay Committee that actually runs things.

The NBR, by the way, charges $500 a ticket to members and $1,000 a ticket to non-members to attend its annual gala at New York City’s Tavern on the Green. Sources tell me the actual cost per person is around $150 “at the most.”

In 2003, the NBR gave a minuscule $17,000 in grants to filmmakers according to their most recent available filing.