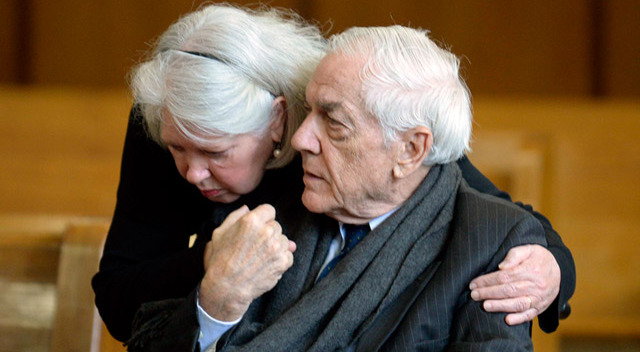 Charlene Marshall put a paid obit in the NY Times this morning for her husband Tony Marshall, son of Brooke Astor. No mention of his conviction and jail sentence for looting his mother’s estate. I like the part about Charlene’s son, Robert, Marshall’s stepson, “with whom he formed an everlasting bond.” Really.Also no mention of Marshall’s sons Philip and Alec, who testified against him. Here it is in its entirety:
MARSHALL–Ambassador Anthony Dryden. A very great man has died today. Patterning his life after his beloved grandfather, General John H. Russell, 16th Commandant of the Marine Corps, Tony was first and always a Marine. Tony loved animals as much as people and was a talented wildlife photographer working for both for National Geographic magazine and World Books Encyclopedia in the 1950’s and 1960’s, an early conservationist, author of seven books and a highly respected three- time United States Ambassador. Tony very much loved his three stepchildren, Arden, Inness and Robert and three step-grandchildren James, Lyon and Weston who showered him with love, affection and respect particularly his stepson Robert with whom he formed an everlasting and most loving bond. During the course of his life, he helped countless young people get their own start in life by introducing them to those who could provide internships or jobs or sometimes he would write a check to tide one over until they could make it on their own. And then he relished in their success. Tony served his country all his life beginning as a young Marine leading his platoon onto Blue Beach on Iwo Jima earning him a Purple Heart, followed by a job as a decoder at the State Department, Consulate General to Turkey stationed in Istanbul, then 40+ years with the CIA and the U.S. Ambassador to Madagascar, the Seychelles, Trinidad and Tobago, and Kenya where he was beloved by President Kenyatta. Until his death, he remained a member of the prestigious Racquet & Tennis Club, The Brook, The Explorers’ Club and was Founding Chairman of the Marine Corps University Foundation as well as a recipient of the General John H. Russell Leadership Award. Tony had the tenderest of hearts, a brilliant mind and an outrageous sense of humor. It was my honor to love and be loved so tenderly by Tony for more than 25 years. Semper Fi my Tonyness,Your beloved Charlene