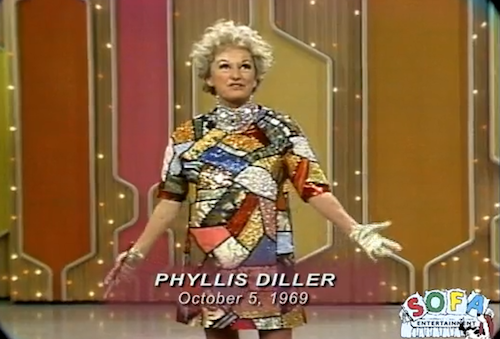 What an irony! Just as Joan Rivers fights for her life, a movie about her sort of mentor is being planned.

A film about Phyllis Diller, the iconic and ground breaking female comic, is being planned. Producers Shaun Redick and Ray Mansfield of the Movie Package Company are producing, also with manager Heidi Rothbart and Alan Gasmer. Playwright Jonathan Tolin and Seth Bass are writing the script. No director has been announced.

Diller died at age 95 in the summer of 2012. She was quite a legend, and easily recognized as Rivers’ if not mentor, the trailblazer who made Joan possible. Rivers would pick up the ball and run with it, herself becoming the reason so many female comics soon blossomed.

Right now, a casting call has gone out for an actress to play Diller from around age 35-60. The film concerns her heyday years from the mid 1950s to the 1970s. This was when Diller was a staple on every single TV variety show, regular with Bob Hope and Ed Sullivan, with her wild wigs and caftans.

If it’s done right, and not kitschy, the movie could be a real awards-buzzer for some actress. The producers are looking for a star to play Phyllis but what they really need is a very solid director. Penny Marshall, you should come out of retirement for this.