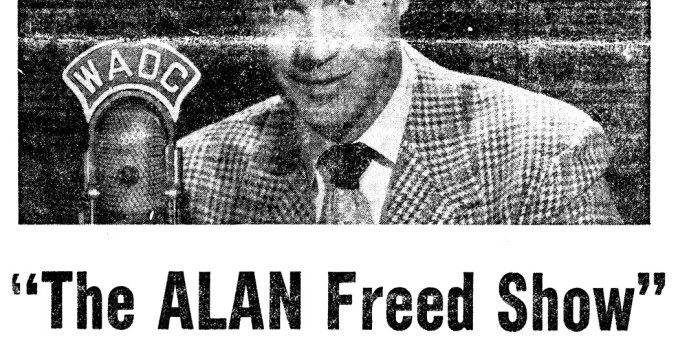 Alan Freed– I’m sorry, but even though he coined the phrase “rock and roll,” this famed dee jay was also at the center of pop music’s first big payola scandal circa 1960. Alan Freed took bribes from everyone to play records on his influential radio shows. Payola cuts both ways. The good way is that it gets records on the radio that might be overlooked. Of course, on the bad side, it’s illegal.

Freed was from Cleveland. So when the Rock and Roll Hall of Fame wanted to build its museum, that’s the city they chose. They turned Freed into an icon, jettisoned the payola scandal, and made him a pioneer instead.  Okay, why not?

Now the Rock Hall has asked Alan’s son Lance Freed, who runs Rondor Music– a big music catalog- to come and get the ashes. They need to make room for Beyonce’s tutu or something. No one ever accused the Rock Hall of being smart, so this story reverberates.

When I heard it this morning, my first thought was, Alan Freed would have horse traded or bribed to keep the ashes in their exhibit case. No whining. Cash.

Henry Stone, who’s 92, was one of the most corrupt people ever in the record biz. Like Freed– and a lot of others– Stone often stuck his name on a songwriting credit to get a royalty he didn’t deserve. Stone wrote in his autobiography a couple of years ago about Alan Freed (who died in 1965 at age 44):

“Alan Freed saw me and called me in, and in those days you had to pay him $1000-$5000 to get a record played…And I always had a good relationship with him. All the other guys looked around like…”Motherfucker. What the hell, man?” All these powers sittin’ there and Henry Stone walks in and Alan Freed goes like this, waves his hand, and says “C’mon in,” and he takes my record and puts it right on. “Mexico Bound,” pa pa padda pa. It wasn’t that big, but it was a doo wop and he put it right on the air. For nothin’.

So people can say what they want about Alan Freed, but as far as I’m concerned he was a pretty good guy. Actually, I know for a fact, ’cause Leonard Chess told me himself that they put Freed’s name down on “Goodnight My Love” by the Moonglows as a songwriter. Leonard was very close with Alan Freed, and helped him to get into NYC from Cleveland.

Songwriter credit is an old perk, but Allen Freed never had nothing to do with writing “Good Night My Love.”

Two great books to read if you want to know who all these people were, and how we got here– Stone’s book “The Stone Cold Truth,” and Tommy James’s memoir about Morris Levy, Roulette Records and the Shondells. This is when ‘number 1 with a bullet’ really meant something!