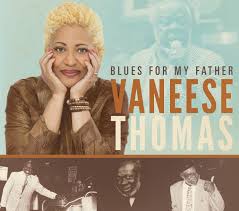 Vaneese Thomas, the most sought after live back up singer in New York, wants to know why her father isn’t in the Rock and Roll Hall of Fame. Rufus Thomas is considered the king of Memphis soul, a legendary performer with many hits. He also introduced Elvis Presley to the black radio audience on Memphis’ WDIA. He also had hits on Stax Records with Vaneese’s sister, Carla. She’s also not in the Rock Hall. It’s a scandal.

Last night, Vaneese introduced her new album. “Blues for My Father” with a sizzling one hour show Chris Noth’s Cutting Room on East 32nd St. This was after two nights of singing backup for Aretha Franklin at Radio City Music Hall. The pair have a long family connection: Aretha’s father, Reverend C.L. Franklin, married Vaneese’s parents in Memphis way back more than 70 years ago.

On Vaneese’s new album (www.vaneesethomas.com) she shares a duet with big sister Carla. She also went back and, with producer husband Wayne Warnecke, created an “Unforgettable” type duet with Rufus. If you like authentic, genuine blues, and R&B, “Blues for My Father” is a treat. Most of the songs are original, with the exception of a rocking version of  John Forgerty’s “Old Man Down the Road.”

As for Rufus, and Carla, the whole story at the Rock Hall is so screwed up at this point, they will probably be passed over for who knows what? Cutting Crew, Bananarama? It’s a sad state of affairs. But you can sign a petition on Vaneese Thomas’s website.