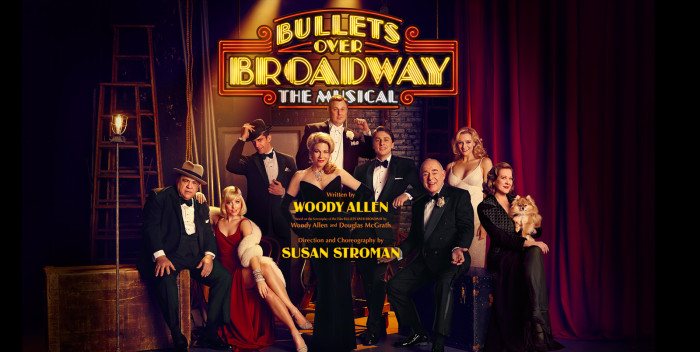 Dianne Wiest won the second of her two Oscars (so far) for Woody Allen’s “Bullets Over Broadway” in 1995. (The first was for “Hannah and Her Sisters” in 1987.) So who would be more critical watching Marin Mazzi take over for the musical version of Helen St. Clair in the Broadway version of “Bullets”? But Wiest, who not only came to the opening night show but went to the lavish party at the Metropolitan Museum, was over the moon with compliments.

“Watching the show tonight, if I hadn’t known better, I would have felt that Woody wrote it for the stage and adapted it to the movies. It felt that right up there.” How did she like Mazzie uttering her famous line, “Don’t speak”? “I loved it and I loved her,” said Wiest, as she stopped near the Temple of Dendur to take pictures with the cast.

Who knows more about musicals than Stanley Donen, who directed “Singing in the Rain”? He couldn’t stop praising the show.

Woody Allen and Soon Yi brought their 14 year old daughter Manzie, a very poised, articulate and attractive teenager. Had she seen the show before? “Oh yes,” she said, many times. Sister Bechet, the couple’s eldest daughter was present for a family night.

The party in the Temple of Dendur was the first ever Broadway after show premiere at the Metropolitan Museum, by the way. It’s the height of elegance.

By the way, everyone had a laugh about yesterday’s preposterous story in the Daily News about “Bullets” being about the Cotton Club and Woody not having black actors.

“Bullets” has nothing whatsoever do with the Cotton Club. There’s a passing reference to it. The News screwed it up, and then lemming website managers picked up the story without checking.

Someone sitting across from me at the show said, “I’m still waiting for the Cotton Club.”

In “Bullets,” you’re not in the Cotton Club at all. You’re in midtown, at a Broadway theater and at a nightclub run by Nick (Vincent Pastore, Pussy from “The Sopranos.”) Playwright David Shayne (a singing, dancing, totally surprising Zach Braff) wants his play produced so badly, he’s willing to let it be funded by Nick  and secretly re-written by low level gangster Cheech (Nicholas Cordero in a knockout sort of Broadway debut). David falls hard for Broadway star Helen (Marin Mazzie) even though he has a patient girlfriend at home (Betsy Wolfe).

Woody and Susan Stroman have woven two dozen songs from the 1920s into the fabric of the movie’s story. The songs fit seamlessly, sometimes with additional lyrics or a little dialogue. But mostly, they are gorgeous jazz pop numbers of the era. Aside from the Carole King musical “Beautiful,” this is the best score of the season among new musicals. I’d rather hear these songs than any more from “If/Then” or “Bridges of Madison County.”

Stroman serves up her usual brilliant platter of dances. Really, you have to see them, one more clever than the last. There’s a dance routine with the gangsters that’s an instant classic. And many others are just jaw dropping. You wonder how Stroman comes up with these ideas. One of them involves bouncy cushions in formidable looking ottomans and the overweight second banana in David’s play.

“Bullets” hums with fun. It’s goofy, with Woody Allen jokes tucked into larger laughs. There’s a lot to love. And when the cast, having wrapped up the plot, finishes with “Yes, We’ve Got No Bananas,” it’s just the right nutty non sequitur. I’m looking forward to seeing it again. Soon.