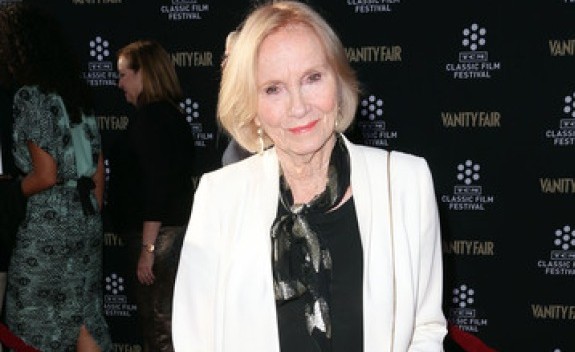 Why isn’t Oscar winner Eva Marie Saint our Judi Dench or Maggie Smith? She told me last night at the premiere of “Winter’s Tale”: “Americans don’t honor our older actors. It’s that simple.”

“Winter’s Tale” is Eva Marie’s first movie in 7 years. She last played Ma Kent in “Superman Returns” (2006). Was she upset about not working?

She’s been married for 63 years to Jeffrey Hayden, the TV and stage director whose list of credits is long and deep.  The Haydens have two grown children and several grandchildren.

Now, let me tell you: Eva Marie Saint is no little old lady. She is elegant, fiercely intelligent, and very articulate. If you think about it, she was the Meryl Streep/Glenn Close of her time. She had quite a run too: “North by Northwest,” “On the Waterfront,” “Exodus,” Hatful of Rain,” “Raintree County,” “The Sandpiper.”

Her favorite film? John Frankenheimer’s  “All Fall Down,” 1962, with Warren Beatty and Karl Malden.

In the 1970s– Saint’s 50s– she moved effortlessly into television. Until “Superman Returns” she worked steadily every year. The Oscar was for “On the Waterfront” in 1957. She has an Emmy from 1990’s “People Like Us.”

Saint has a star on the Hollywood Walk of Fame. But she’s missing a Kennedy Center honor. I don’t think she even realizes it.

In “Winter’s Tale,” Saint serves a function similar to what Lois Smith played in “Minority Report.” She gives the ah-ha! moment, helps explain the story, and leaves a lump in the throat.

At last night’s elegant dinner at the Metropolitan Club, following a Ziegfeld premiere, Saint was chatted up by everyone starting with co-stat Colin Farrell, and followed by a procession of well wishers. She told me, “I do get a little overwhelmed at these things.” But the Haydens stuck it out.

By the way, Eva Marie is one of the few Oscar voters who wouldn’t tell me who is she voting for. “I liked five movies a lot,” she said, “but I can’t tell you which ones.” She said, “I’ll interview you, Which ones did you like?”

I mentioned some titles and names. She grinned when I said, “Cate Blanchett?”

“I’m not saying a thing,” the great actress responded. So there!