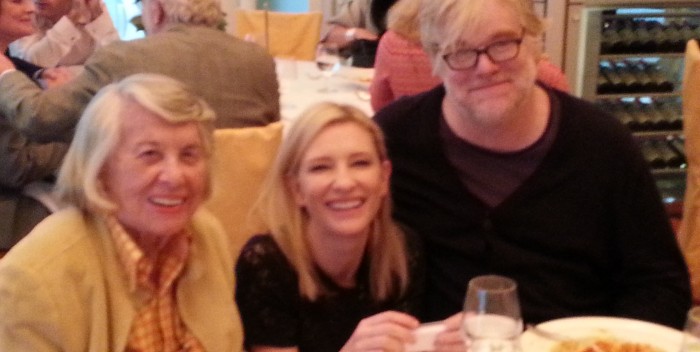 The picture attached here– I took it at Le Cirque, at a lunch for Cate Blanchett last fall. Liz Smith and Philip Seymour Hoffman just happened to get in that picture. It’s not in focus, but I’m glad I have it now. Phil and I had not seen each other in a while but we’d been in touch by email. When he got out of rehab we kept making plans to get together. At the lunch he told me was doing a lot better after succumbing to heroin addiction again. He looked good, and you can see it here.

The loss of Philip Seymour Hoffman is beyond terrible for his family and close friends. Their loss is different than ours. PSH was maybe the best actor under 50. I am not kidding. Look at his film work, not just in “Capote,” for which he won the Academy Award. He’s devastating in “The Master.” He’s extraordinary in “The Savages.” Any film where he’s added– like “Mission Impossible II”– becomes better by several degees because of his presence.

If you want to see Phil just rock out a performance, rent Sidney Lumet’s “Before the Devil Knows You’re Dead.” If the idiots from ThinkFilm had had resources and money, Phil would have gotten an Oscar again. It’s a lost gem.

Then you have theater. I’m sorry, but eventually real actors have to show their stuff by claiming the stage. It’s the same as singers performing without their augmentation in charity shows. It’s what separates the real ones from the fake. Philip Seymour Hoffman was our Jason Robards.

I hope there’s a taped version of Mike Nichols’ production of “Death of a Salesman” somewhere. Phil was the most magnificent Willy Loman. He should have won a Tony. I think even he was surprised — and saddened– to lose to James Corden’s comic whirlwind. They should not have been in the same category. Corden was great. PSH soared.

Hoffman’s death is a wipe out for us, the audience. We are now denied this remarkable presence who might have entertained and enlightened us for 30 more years. There’s no else like him in his age group. If we were lucky he’d be doing Lear and O’Neill and Chekhov, and new plays to rave reviews. There were certainly also more Oscar nominations and wins in his future. And he was filming a new series for Showtime, called “Happyish,” directed by John Cameron Mitchell. Advance buzz was very high.

But do go back and look the movies– his work with Laura Linney and Catherine Keener and Ethan Hawke and Marisa Tomei. Philip Seymour Hoffman was The Real Thing. Yes, his death is tragic because he was a lovely guy in so many ways. But he was one of the last links to really superior work as an actor.