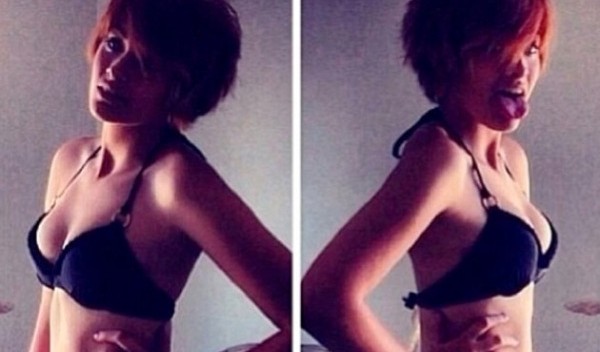 Paris Jackson is back on social media. Just as her family is once again angling to get money from someone for Michael Jackson’s death (I’ll get into that in a minute) Paris has returned from social media exile. Actually she was never gone. Even though her Twitter account stopped cold last June when she attempted suicide, Paris made a quick switch to Instagram.

On Instagram the not yet 16 year old has been posting photos regularly. This week, she put a photo of herself in a bikini, a Happy New Year’s card, and a few shots of friends either from home in Calabasas or from her Utah sleep away and recovery school. She looks happy and like a 15 year old.

The only problematic photo was posted last September with a disturbing message: “To love is to destroy. And that to be loved is to be the one destroyed.”

Hopefully, some therapy is being applied at that school.

And oh yes, the Jacksons, thwarted in their attempt to get money by suing AEGLive, are now trying to snatch that $17 million Lloyds of London policy from the insurer. In the AEG case the Jacksons claimed that Michael was sick as a dog, frail, and not able to perform the London concerts. Now in the Lloyds case they say Michael was in great shape. Whatever. The court sees right through it. There will be no $17 million payday.