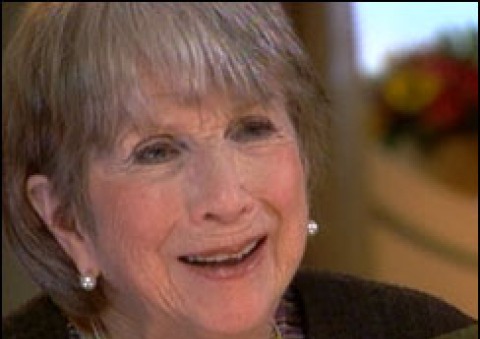 Six time Tony Award winner Julie Harris, first lady of the American theater, got an all-star send off this afternoon from a bunch of stars in a packed Broadway theater. Convening at the Bernard Jacobs Theater on West 45th St. to say their goodbyes were no less than Christopher Plummer, Joan van Ark, Hal Holbook, Rosemary Harris, Cherry Jones, and Zoe Caldwell among others.

There were plenty of stars in the audience, too, including Jane Alexander and Joan Copeland, and two more of Harris’s “Knots Landing” co-stars besides van Ark– Donna Mills and Michele Lee, who’d each flown in especially to pay tribute to their amazing friend.

After the show, all the speakers– including organizer Francesca James, playwright Bill Luce (“The Belle of Amherst”), producer Biff Liff, and actors Jennifer Harmon and Roberta Maxwell– threw a big lunch upstairs at Sardi’s with lots of toasts and anecdotes about the generous shopaholic Harris who doted on her friends.

Famed theater producer Liz McCann recalled how CBS once cut a Harris tribute with Meryl Streep presenting an award to her from a Tony Awards broadcast.

At one point the memorial could have gotten its own Tony award considering the murderer’s row of actors who appeared one after another. van Ark told the story of how Harris, then the only female graduate of Yale Drama School, got the young actress admitted, making her the second female graduate of Yale Drama School. Years later by coincidence, Harris was hired to play van Ark’s mother on “Knots Landing.”

Holbrook, who was born the same year as Harris, called her acting “simple truth.”

A tape was played from a Charlie Rose interview in which Dames Maggie Smith and Judi Dench claimed the only performance they couldn’t top was Harris in “A Member of the Wedding.”

van Ark told me at Sardi’s that the Knots Landing gang– still extremely close after 14 seasons on CBS– have started a Julie Harris Scholarship at Yale Drama. “Alec Baldwin put in the first $25,000,” van Ark said of her one time TV brother. “That’s what gave it legitimacy.”

Check it out at drama.yale.edu/julieharrisscholarship or contact deborah.herman@yale.edu for more information