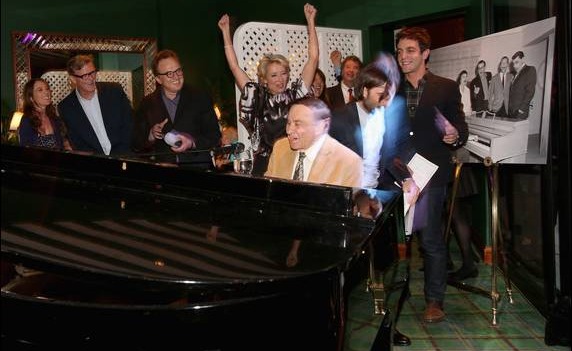 Sean Penn joined his good pal Emma Thompson for a one of kind night of singing Awards seasons’ event around the Disney Oscar Contender, ‘Saving Mr. Banks’ at the Polo Lounge in the famed Beverly Hills Hotel.  ‘Banks’ tells the story of the turbulent relationship between Walt Disney (himself played by Tom Hanks, who could find himself with a Best Supporting Actor nod) and, P.L. Travers (Emma Thompson, a shoo-in Best Actress nominee).

Travers wrote ‘Mary Poppins,’ one of the most beloved characters in literary lore. Travers and Disney’s complicated back and forth history is woven in with the extraordinary talented Sherman brothers, who composed the music for that score and so much more including ‘The Jungle Book,’ ‘Chitty Chitty Bang Bang’ and many other classics.

‘Banks,’ had its AFI premiere at the Chinese Theater the night before, where nearly 50 years ago ‘Poppins’ debuted.  This night however, belong to he ageless graceful and debonair 85-year old Richard M. Sherman, who along with his late brother Robert, composed these legendary songs and led a sing-along, regaling the crowd as well with his remembrances of those magical and tough times.

Sherman admitted to the crowd that those two weeks spent with Travers were ‘torturous.’  He continued, ‘we were falling apart from this woman.  She was driving us completely bananas.’

What was heavenly however, was hearing him sing, along with the grateful crowd, songs the duo composed such as the pop hits they first wrote for Annette Funicello, ‘Tall Paul,’ songs from The Parent Trap‘s Lets Get Together,’ for Hayley Mills, songs from ‘The Jungle Book,’ and more.  Sherman then went on to sing ‘It’s A Small World,’ by noting that, “People either want to kiss us or kill us for this song.”

That didn’t stop Penn; he was singing that one with Gusto.

Sherman then went on to the Poppins classics including, ‘Supercalifragilisticexpialidocious,’ ‘Chim Chim Cheree,’ and the song that Sherman said “deep in my heart,” ‘Lets Go Fly A Kite. ‘  Emma Thompson, besides being the classiest lady around, sings beautifully and was joined by her fellow cast mates Jason Schwartzman, Bradley Whitford, B. J. Novak and director John Lee Hancock in singing some of the songs alongside Sherman.

The evening was superbly organized by Peggy Siegal and Disney’s Michelle Sewell, whom Disney CEO Alan Horn especially went out of his way to thank.  Besides Penn, Mickey Rooney, Jacqueline Bisset, (sitting beside Sean at the table with Emma,) Carl Reiner, Jane Seymour, Mary Kay Place and Natassja Kinski were the celebs making an appearance, as well as Academy voters.

Horn also mentioned that, “50 years ago, P.L Travers, stayed at this hotel.   She went down the red carpet to her car and then went to work at Disney Studios.”  Sherman told me that Travers indeed was the toughest person he ever worked with.” He added, “It does seem surreal that it’s 50 years later.”

Penn, as he was leaving, turned around and told me that ‘it was a beautiful night, what’s not to love?”  You got that right Sean.