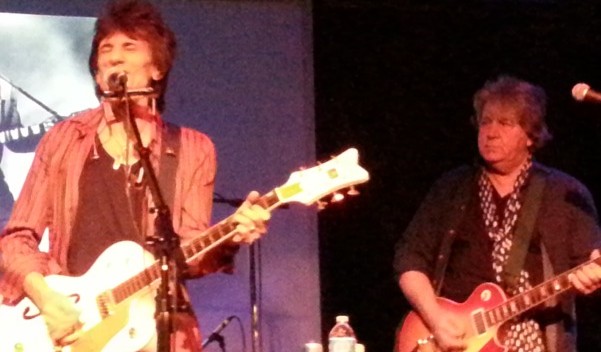 Ronnie Wood is about five foot seven and 125 pounds sopping wet. But when he picks up a guitar and plays, it’s just like yesterday. Or better. Ronnie, Rolling Stone Mick Taylor, famed blues keyboardist Al Kooper and Bad Company drummer Simon Kirke blew out the Cutting Room last night in two shows. The first was a warm up. The second was a shredder, dedicated to the music of Jimmy Reed. The Oklahoma blues man’s classics like “Bright Lights Big City” and “Goin’ to New York” couldn’t have sounded newer or deeper in this quartet’s grip.

Actor Chris Noth introduced the evening–he’s an owner of The Cutting Room. A total non sequitur guest: Mary Kate Olsen with her much older boyfriend Olivier Sarkozy. She is extremely tiny. I’m not sure but she may have ordered off the children’s menu. Also on hand: Simon Kirke’s actress daughter Jemma Kirke. You may know her as Jessa on “Girls.”

I took the picture attached (c.2013 Showbiz411). I’ll try and put up a video later. Watching these guys was sort of amazing. Wood and Taylor are like the engine of the Stones. Watching them you see (apart from Keif) why that band is still humming. Kooper, a legend, played on Blood Sweat and Tears classic album “Child is Father to the Man.” Kirk– Bad Company, need I say more?