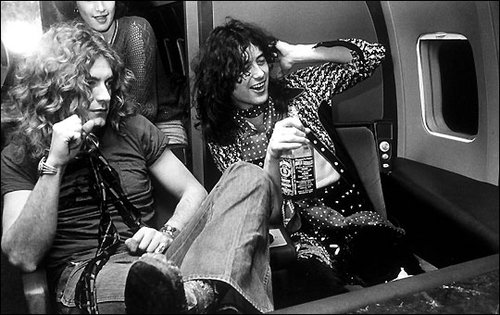 Led Zeppelin, notorious for stealing songs from obscure sources and sampling other people’s music, have been nominated for induction into the Songwriters Hall of Fame this morning. They are on a strange list that also includes Madonna, whose songs have all been written by others including Stephen Bray and Patrick Leonard.

But it’s the inclusion of Zeppelin’s Robert Plant and Jimmy Page that will certainly causes peels of laughter today, especially among music historians. The group’s catalog is well known for being purloined from Muddy Waters, Howlin’ Wolf, Robert Johnson and so on.

Their song “Dazed and Confused” was lifted from a 1967 song of the same name by a little known artist called Jake Holmes. Holmes opened for the Yardbirds — Page’s group before Zepp- in 1967 in Greenwich Village. Two years later, the new Zeppelin released their “Dazed and Confused.” For some reason, Holmes waited until 2010 to sue them.

The internet is littered with examples of Zeppelin’s thievery. The website whosampled.com has dozens and dozens of examples of which folk, blues and early rock songs became Led Zeppelin hits. There are also several YouTube videos demonstrating all the uncredited samples. Thanks to the amateur musicologists who put these videos together.

So how did Zeppelin make it onto the nominees list this morning? For years there were arguments against them, and all the evidence was presented. But I’m told that the success of having Steven Tyler and Joe Perr last year at the SHOF dinner spurred this on. The major difference, though, is that they actually wrote their own songs. And when they wanted to record a blues album, they did with “Honkin’ on Bobo.”

None of what Zeppelin did took away from their amazing performances. As a rock band playing the blues, they are unequaled. But songwriters? That’s something else.

As for Madonna: I’m told a plea was made on her behalf. But the endorser may be having second thoughts now. As for the other performing nominees, several are long overdue. Donovan and Ray Davies are the most obvious. Cat Stevens should be in both the Songwriters and Rock and Roll Halls of fame.Elvis Costello and Pete Townshend are also missing from the SHOF.

If the SHOF wants to be more contemporary, then Cyndi Lauper– legitimately a great songwriter–should be inducted. She just won a Tony Award for Best Musical for “Kinky Boots.” That’s not something Madonna will ever achieve.

A footnote on Madonna: when Tom Kelly and Billy Steinberg, who wrote “Like a Virgin,” Madonna’s biggest hit, were inducted, she didn’t even bother to show up. The writers made a joke of it in their speech, and the audience howled.