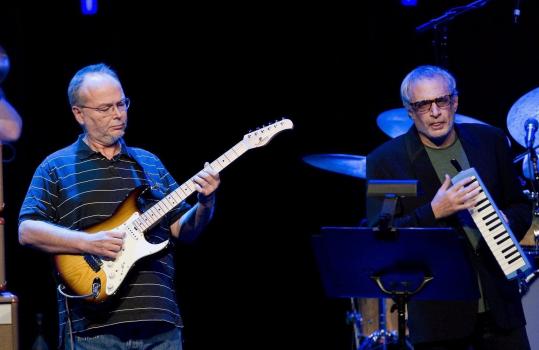 Ok. You know, I was 20 years old in 1977 and already five years into Steely Dan from the release of “Countdown to Ecstasy.” The album “Aja” was the pinnacle their original output of classic albums. I hadn’t seen them since June 2007. But last night Donald Fagen, Walter Becker and their outstanding band of musicians specializing in jazz and rock put on “Aja” from start to finish, all seven songs, taking around 40 minutes. It was a pleasure almost beyond description.

Becker and Fagen look pretty much as last seen by me. Their guitarist extraordinaire Jon Herington, who gets to play the intricate leads “Reeling in the Years” and “Kid Charlemagne,” is the Benjamin Button of rock. He actually looks younger than the last time I saw him, and his playing is more supple than ever. The whole band, including legendary bass player Freddie Washington, brother and sister Michael Leonhart (trumpet) and Carolyn (singer), and drummer Keith Carlock is a well oiled machine that can turn out the Steely Dan hits and still make them sound robust and rejuvenated.

Walter Becker, who lives in Hawaii was always an enigma, actually gets to be master of ceremonies. He plays solos, sings lead on “Daddy Don’t Live in New York City” and gets to tell jokes, introduce the band. Sometimes on stage he seems to be in a trance. But when he wakes up he’s funny, accessible, and brilliant.

Fagen, another enigma, has also loosened up over the years, is still the Ed Sullivan of jazz rock, but he’s also a strangely gifted multi-tasker who leads this group through its ornate paces. He gets away from the keyboards to play the melodica (a keyboard horn sort of) which provides a lot of amusement adds punctuated lightness- dare I say whimsy– to several of the heavier Steely Dan numbers like “Hey Nineteen.”

(Funny thing about that song, too– when it came out in 1980, Fagen referenced Aretha Franklin as maybe a forgotten golden oldie. Immediately thereafter Aretha launched her renaissance with Clive Davis, and has never gone away.)

The entire band’s versatility is just a pleasure as they mix the trademark quirky pop with real jazz. And you know that both Fagen and Becker would love to drop the hits and play obscure songs all night. But the new trend is to play whole albums. They did with others in the last week, but “Aja” was the one not to miss.

From the beginning of the title track to the end of “Deacon Blues” you really feel like there’s a chance actual music could come back to radio in our time. The gorgeous craftsmanship, the melodic beauty, the composition meaning something– you just wonder why anyone in the current record business would want to be involved with the junk we are now fed 24/7 that masquerades as music. Do I sound like a curmudgeon from 1977? I don’t care. Viva Steely Dan.