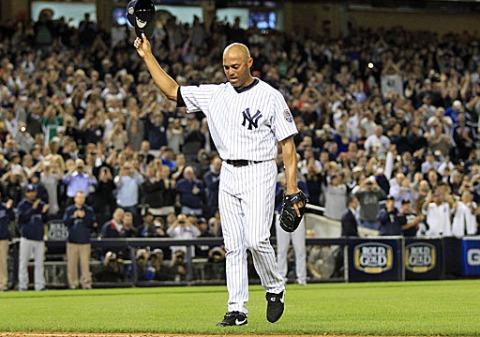 Mariano Rivera, the most successful closer in baseball history, made a classy exit tonight from a magnificent career. After 1,173 strike outs and 19 seasons with the New York Yankees, Rivera came in to pitch in the 8th inning and for a little of the 9th this evening. It was one of those historic moments at Yankee Stadium, made even more emotional because the great pitcher Andy Pettite also made his final appearance in Yankee Stadium tonight and got a long ovation.

Rivera’s final moments really showed what a real leader and inspiration he has been. The first great moment was just before the game ended, when Derek Jeter and Pettite came out to the mound to walk him back to the dugout. Rivera, 43,  fell apart, and for a few minutes it was tears and hugs all around as the entire crowd of more than 50,000 fans clapped, cheered, and sang Rivera’s name. Imagine that this man has saved the Yankees time and time again from everything short of a dinosaur attack or a tsunami. They relied on him when they had no business to, and he always unfailingly came though for them. You’d be crying, too.

The second great moment was after the game, when Rivera went out to the mound by himself. It was almost slow motion. He sort of kicked around the mound for the last time. Then he picked up some dirt, scooped it up in his hands, his souvenir from the place where he had spent so much of his adult life. It was absolutely poetic in the way only baseball can be more than any other sport. Was he thinking of the rain, the heat, the cold, the tight score, his batters who weren’t helping him? He waved once more and the crowd just went wild. And an era ends. It’s the last time we’ll ever hear “Enter Sandman” played at Yankee Stadium.

Thank you, Mariano. Thank you so much.