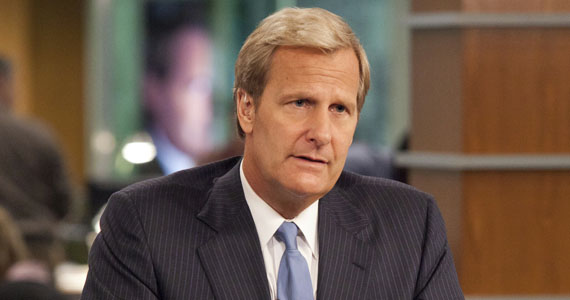 The biggest surprise at the 2013 Emmy Awards: that Jeff Daniels vaulted over Bryan Cranston, Jon Hamm and Damian Lewis to win Best Actor for “The Newsroom.” Even Daniels was stunned. At the Governor’s Ball he told me: “When Bobby Cannavale won Supporting Actor, all of a sudden I thought, someone really watches these shows. They were really paying attention. And that’s when I thought I had a chance.”

Suddenly “The Newsroom” has a new life. It seems certain to return for a third season. Show creator Aaron Sorkin told me: “I think I’m more excited about Jeff Daniels winning than Jeff Daniels, if that’s possible.”

Many of “The Newsroom” cast slipped from the Governors Ball at the LA Convention Center to the HBO bash at the Pacific Design Center. Jane Fonda was there with record producer Richard Perry. Michael Douglas, Matt Damon, and everyone associated with HBO’s “Behind the Candelabra,” especially exec produer Jerry Weintraub, celebrated their 11 Emmy awards.

The HBO party was sort of Ground Zero for just about everyone from the Emmys, as well as Mick Jagger. He’s producing an HBO pilot next year with “Boardwalk Empire” creator Terence Winter. And the HBO gang was further energized by not one but two wins for “Veep”–Julia Louis Dreyfus for Best Actress and Tony Hale for Best Supporting Actor.

But then of course there were the “True Blood” actors including Anna Paquin, and “Games of Thrones” stars, plus Lena Dunham from “Girls.” Tony Goldwyn, star of “Scandal” came with his 23 year old daughter. Sarah Paulson, Grace Gummer, and Lily Rabe– three great young New York actresses, hung out together with Hamish Linklater from “The Newsroom.”  It was interesting to see the New Yorkers form one contingent at the massive party.

I told Paulson that there was a huge spike on Twitter claiming she should have won something for “American Horror Story: Asylum.” She said she’d heard about it. “I’ve gotten a lot of emails,” she said.