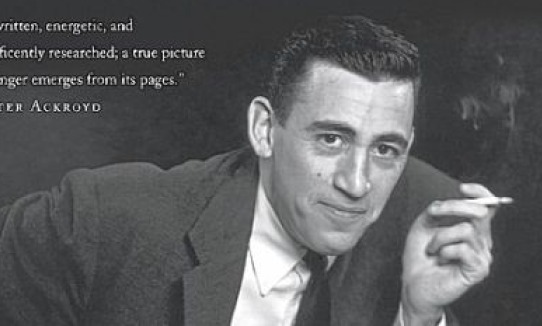 J.D. Salinger is rolling in his grave. You can hear him if you listen carefully. That’s because this eccentric, reclusive writer, hero to so many, is having most of his secrets uncovered in a new documentary and a companion book coming out this week. We saw the “Salinger” movie last night at the Museum of Modern Art.  It’s a doozy and not to be missed.

Made over a 10 year period by Shane Salerno (now writing one of the “Avatar” sequels with James Cameron). Among the revelations: Salinger’s first was a Nazi who he met while doing counterintelligence in World War II. He brought her home to meet his Jewish family after they’d been hitched. A few weeks later the marriage was over, and he shipped her home to Germany.

Salerno has done an incredible job of covering most of the Salinger bases. He’s uncovered Jean Miller, the woman who– when she was 14– was the prototype for Esme, the young lass in the story “For Esme, With Love and Squalor.” We learn that many of Salinger’s famous creations were based on real people. He himself was Holden Caulfield and probably Seymour Glass. His second wife, Claire Douglas, was Franny of “Franny and Zooey” fame. And so on.

Mainly what the Salerno project does is place Salinger as a post-World War II writer along with James Jones, Kurt Vonnegut, Joseph Heller,  Norman Mailer, latecomer William Wharton, Leon Uris, and so many others. Salinger is not ordinarily thought of that way because his more prominent stories are not about war exactly, but sort of ironic, comic and miserable characters pursuing their own philosophies. Salerno explains- relaying on Salinger biographers like David Shields, Paul Alexander and others– that Salinger’s horrific eyewitness experiences during the liberation of  Dachau, etc– caused him to have a nervous breakdown, post-traumatic stress syndrome, and a variety of mental illnesses including rudeness.

Salinger, especially in the Simon & Schuster companion book is miserable most of the time. He lives in his head, can’t form relationships, is disloyal, and mean. He’s also a horndog who’s always hitting on women, the younger the better.

The movie is bursting with interviews and information. Some of it is unnecessary both on screen and the book. Much as I like Philip Seymour Hoffman, Edward Norton and John Cusack, I don’t know why their opinions are included. There are several other people in the film who are not exactly well known or prominent Salinger experts or even old friends.

But there are others, like A.E. Hotchner, A. Scott Berg, and Leila Hadley Luce who are wonderful and move the story along. The best of the bunch is Jean Miller, who I discovered comes from a big New York society family (I can ‘t say which one). So elegant and well spoken, Miller gives a very thorough picture of Salinger during his prime writing years– and she from ages 14 to 18. Miller told me she’s just finished writing her own book, and hopes to publish it soon.  “I would never have done this if Jerry”–that’s Jerome David– “were still alive.”

What would Salinger think of the book and documentary now? “He’d say we’re all parasites,” Miller observed.