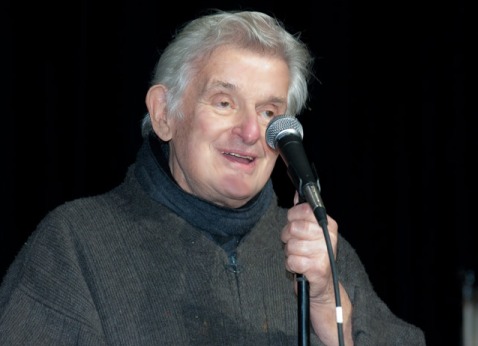 Sid Bernstein, the man who brought the Beatles to America and promoted their concerts, died this morning at age 95. He was a popular and favorite New York figure, a real character who built his whole career on those shining moments. He will be missed so by many in the music world here. When they saw a mold was broken when someone was created that was Sid. He leaves an adoring family. I knew Sid for years and years. He was the sweetest guy, just lovely. In the last year we’ve lost Nat Weiss and Pete Bennett. Sid will be seeing them as soon as he arrives in heaven and books a show. God bless, Sid. Official bio follows from publicist Merle Frimark:

What do The Beatles, Tony Bennett, the Rolling Stones, Fats Domino, Tito Puente, Judy Garland and a host of other luminaries have in common? They all have been touched, in some way, by the inimitable promoter, agent and manager extraordinaire, Sid Bernstein. Mr. Bernstein passed away on Wednesday, August 21, 2013 in New York City, said his longtime friend, publicist Merle Frimark.

One could call Sid a “dream merchant,” for he has been solely, or partially, responsible for shaping the careers of some of the greatest and most popular celebrities of our time. After all, he was the man who had the vision to single-handedly bring The Beatles to America!

An entertainment impresario who made show business history time and time again, Sid was born on August 12th, 1918 in New York City, the sole son Russian immigrants Israel and Ida Bernstein. He was raised in a supportive and loving home in The Bronx and, although his given name was Sid, his parents and grandmother often referred to him in Yiddish as Simcha. The name stood for happiness and was a euphemism for partying and celebration. Considering how he ended up spending most of his life in music and entertainment, the family name was most apropos and prophetic.

Bernstein was an industrious youth often working in his father’s tailor shop making deliveries and the like. Early on he also developed an interest in the arts. At thirteen he would go downtown to Manhattan avidly taking in movies, stage and vaudeville shows at the various theaters there. It was also at this time that young Sid began to exhibit the talents of salesmanship and promotion that would serve him so well later in life. While in high school, he heard an uncommonly beautiful voice singing “The Star Spangled Banner” at an assembly in the school auditorium. He quickly sought out the fellow student and, after much deliberation, convinced young Sol Strausser, the singer, to allow Sid the opportunity to try and get him a spot on the Major Bowes Amateur Hour, a popular radio program at that time. Sid was definitely bitten by the music biz bug, at this point, and with some success getting his young friend and classmate a shot on the program, he went on promoting local dances and other related events in his neighborhood.

Fast forward a few years to the days of World War II where Sid was stationed in France. It was the town of Dijon, the famous European mustard capital to be exact, and besides his military duties as part of the 602nd Triple A Gun Battalion, he published a newspaper filled with items from back home, entertainment and lifestyle information for the serviceman called The Comeback Diary. During the latter days of the war, Bernstein’s captain approached him about branching out from his journalistic pursuits in favor of another form of morale building. “He told me that a lot of the servicemen were being taken advantage of in the area cafes with high prices and so forth,” explains Sid. “The captain asked me what I’d like to do after the war was over. I said ‘anything but carry a rifle around anymore.’ I had been writing in the paper about wanting to establish a G.I. nightclub for the guys, and the captain gave me the go ahead to start one.” Soon after, Sid acquired a location in town, requisitioned tables, chairs and furnishings, hired waitresses and cooks and, in no time, the nightclub proved a hit with soldiers anxious to remove the ravages of war from their psyche and ready to party and return home.

Years later, back in New York, Sid was busy establishing himself as an agent for the General Artists Corporation (G.A.C.). It was one of the largest talent agencies in the world handling all the top people in show business. When Bernstein joined G.A.C. he already had acquired a lot of experience producing shows, in New York and elsewhere, at the Paramount, the Palace, the Apollo, the Newport Jazz Festival, and the comeback tour for Judy Garland. Eventually he became the “responsible” agent for Tony Bennett, seeing to his specific individual career needs. Bennett, at this time, had a modicum of success on television and on record yet felt his career was somewhat stifled. After being with the agency for a time, Sid was also struggling with some career decisions of his own. He had success with and enjoyed his role, in the past, as the producer and promoter of acts and events big and small. He knew, as a talent agent, it was a legal and ethical conflict of interest to also engage in promotion, too. Nevertheless he proposed the idea to Bennett of bolstering his popularity and career by performing at Carnegie Hall. Tony loved it and Sid, working incognito, handled all the arrangements, booked the hall and put on the show. This was a watershed moment for Tony, as he had never played the great venue. Bennett’s career, however, skyrocketed from that point placing him forever among our most beloved and prized interpreters of American song. “Tony was a real humanitarian. He once did a show for me for nothing, just to say thanks for the break at Carnegie Hall,” says Sid.

While Bernstein has helped so many in show business, he is perhaps best known for bringing The Beatles to Carnegie Hall and, later, Shea Stadium. He helped start “The British Invasion” by bringing The Beatles to the US from England. “I’m a hunch player, you see,” states Sid modestly. “I was just glad to get this group I had been reading about for months. It took eight months after I booked them for there to be any airplay of their records on the radio. I had to convince Carnegie Hall and my financial backers to take a chance on this then-unknown group. I had been reading about their progress in the European papers and was fascinated with the hysteria that surrounded them. I was the first to promote The Beatles in the States and Ed Sullivan called me first about them before he ever booked them on his television show.”

He worked with The Rascals for five years, helping along their rise from obscurity, changing their name from “Young Rascals” to “The Rascals” in an attempt to avoid controversy.

Bernstein also organized concerts for Frank Sinatra, Jimi Hendrix, Laura Branigan and Sly & the Family Stone. In 1964, he brought many Israeli singers to the United States for their first major concerts, among them Shoshana Damari Shaike Ophir and Yaffa Yarkoni, who appeared at Carnegie Hall a year after The Beatles.

The books, Not Just the Beatles and It’s Sid Bernstein Calling…The Promoter Who Brought the Beatles to America told by Bernstein and written by friend Arthur Aaron, are accounts of these and so many other stories presented by a most remarkable and masterful storyteller.

“My secret to success is that I’ve always loved good music and people,” summarizes Sid. “The players in the promotion business today are, by and large, not in it for the art anymore. It’s all about how many bucks can you make on a concert. That’s permissible. I mean we are in a capitalistic society. But I feel a lot of the art thing is lost. It shouldn’t just be about money. It should be about loving what you do.”

In a recent, unreleased documentary, Sid Bernstein Presents is the story of the man who brought The Beatles to America. But the beauty of the film comes from Sid’s own story. A kid from Harlem, Bernstein was a dreamer who worked tirelessly for his clients out of a desire to share his love of music with the world, and his belief in music’s power to bring people together. The film’s most prominent interviews include a diverse array of stars such as Lenny Kravitz, Shirley MacLaine, Steven Van Zandt, Moody Blues, Paul Anka, Dick Clark, The Rascals, Jerry Vale, Phoebe Snow, The Animals, Herman’s Hermits, comedians Red Buttons and Pat Cooper, music titans Ahmet Ertegun, Bruce Lundvall, Woodstock Promoter Michael Lang and more. It also contains the last filmed interview with late Latin great Tito Puente and has a great deal of footage that is rare or has never been seen by the public. It was James Brown who noted that in the 1960s, Sid was the only impresario booking black entertainment and thus, according to Brown “was in the forefront of race relations.”

At age 93, Sid recorded and released a new CD of songs near and dear to his heart, “Sid Bernstein Presents” along with singer/producer/composer Deirdre Broderick. On this CD, Sid (and Ms. Broderick) sing such memorable songs as Imagine, La Vie En Rose, Crying, It’s All In The Game, a Tribute to Tony Bennett and more.

Funeral arrangements will be forthcoming.

No virus found in this message.
Checked by TNTMAX – www.tntmax.com
­­