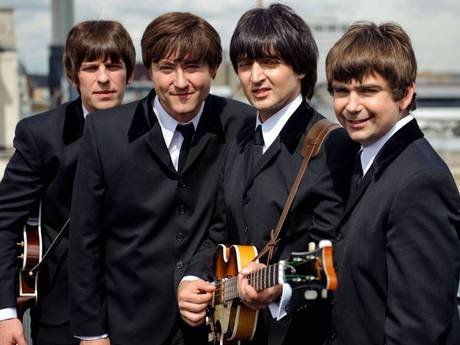 Well, “Let it Be,” a ‘celebration’ of the Beatles, opened last night on Broadway. You may have seen the huge ad campaign: “This production is not endorsed by Apple Corps or the Beatles.” Ouch. No, there is only one authorized Beatles show in the world, in Las Vegas, the amazing Cirque du Soleil creation called “Love.” This one, like “Rain” before it and “Beatlemania” years ago, is something the Beatles “allow” to make them lots of money. But they will never acknowledge it.

The deal is: Sony/ATV Music Publishing licenses the music. They keep an arm’s distance from it otherwise. The Beatles– meaning, Paul. Ringo, Olivia Harrison and Yoko Ono, turn a blind eye to the whole thing. As one person noted, “Yoko likes the checks.” Ono has fewer money making opportunities than McCartney, so you can’t really blame her.

Indeed, during the show, you might not even know the performers are playing the Beatles. It’s a concert, basically, largely based on Paul McCartney’s touring show (on tour now, by the way) and TV clips from the old days.The results vary. Those parts that do have a correlation to existing material are fine. But the section devoted to “Sgt. Pepper”– basically invented by the show’s creators– is awkward, corny, and painful.

Many names are not uttered during the two and a half hours– like any of the individual Beatles, or even Ed Sullivan. I’m not sure, but I’d wager that that’s part of the deal. The performers can’t even say that they’re playing John, Paul, George, and Ringo, just people who look and sound like them.

A two and a half hour Madame Tussaud’s production without any story of any kind is a bit enervating. Some songs and numbers are fine, others are wretchedly bad. On the upside, George Harrison’s “While My Guitar Gently Weeps” is the highlight of the whole show, incredibly moving. It’s a surprise since John Brosnan, who plays George, has less to do for most of the show than George did with the real Beatles.

The other high point, I thought, was the rendition of “In My Life.” Rarely heard anymore because John Lennon is dead and Paul McCartney doesn’t perform it, “In My Life” blossoms as an elegiac ballad. It’s one of the few moments in which the Lennon character really gets to shine.

Most of the hits are here. There’s no songlist but suffice to say they cover a lot of ground, from “I Want to Hold Your Hand” to “Let it Be.” There’s actually no reason to call the show “Let it Be,” by the way. They could have called it “The Long and Winding Road” or “Get Back” or a half dozen other things. There’s a total mindlessness to the entire production. But for kids who don’t know much about the Beatles, for tourists, and ‘nostalgists’ it’s harmless entertainment.

PS I could say this now about every show. But to the two idiots sitting in my row who kept using their phones, checking texts, and weather, the day is coming, my friends, when you will need insurance for that thing. That’s all I’m saying…