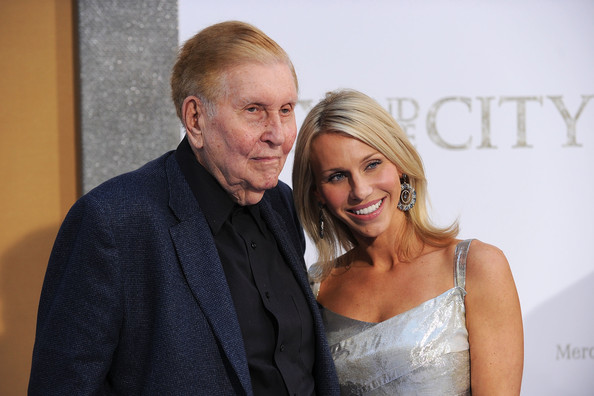 I don’t even know I can explain this: Sumner Redstone‘s ex-stewardess girlfriend is named Malia Andelin. She is listed as the sole donor to Global Poverty Project. They’re the underlying registered charity of Global Citizen, the group that’s putting on the all-star charity event in Central Park this September.

Global Citizen says it’s part an an Australian clothing company called Cotton One. (You can read about them in my last post.) But when I asked about a Form 990 for Global Citizen, they referred me to the Form 990 filed for Global Poverty Project, And the sole donor to GPP is one Elizabeth Malia Andelin of Beverly Hills, a former flight attendant on Viacom  chief Sumner Redstone’s private plane. Andelin donated $1.5 million. She’s the purported 35ish galpal of 90 year old Redstone. Their pictures are pretty much all over the internet, and they look about as couple-y as Redstone will allow given his checkered romantic history.

Hugh Evans is the extremely well spoken founder of the group. I spoke to him this morning. He has the Australian gift of gab, which isn’t a bad thing when you’re raising lots of money and chatting up celebrities. Evans is passionate about ending global poverty. He insists on a couple of things: One– that Redstone and Andelin “are not a couple. She isn’t his girlfriend.” Two– that all the money raised by Global Citizen goes to the cause of ending extreme poverty. He seemed unaware of the Form 990 expense listings.  Evans was featured last year in the New York Times and he’s a celebrity in Australia. http://www.nytimes.com/2012/08/23/arts/music/hugh-evans-29-force-behind-global-festival-on-great-lawn.html?pagewanted=all&_r=0

He told me that all of the musicians in this year’s show are performing for free. At 30, he expressed shock that I had attended the famous concert on the Great Lawn in Central Park, back in 1981, with Simon & Garfunkel. “You don’t sound old,” he said. I assured him I had aged naturally.

Evans said Global Citizen doesn’t make charitable donations. “We’re an advocacy group. We got $1.3 billion last year in commitments from other groups and corporations,” he said. “You can see them on our website.”

He also said that a committee of people in the music industry and with big agencies like CAA, WME, Live Nation and AEG Live met to organize the concert.

And what’s the interest of Australian retailer Cotton One, which seems to be somewhere at the root of all this? “They have 153 stores in the US now, and they’re planning a thousand more in the next year.”