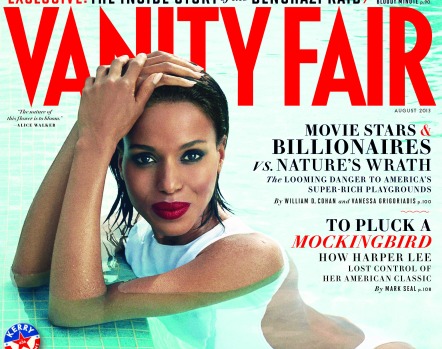 I am so pleased to see Kerry Washington on the cover of Vanity Fair this month. The new issue is on sale July 7th but it’s in New York today. Kerry breaks the Vanity Fair cover color barrier–the magazine rarely features people of color, and when they do, they are relegated to side panels. Such was the case for Kerry in this past year’s TV issue.

But now there she is–the star of “Scandal” and “Django Unchained” is very involved with lots of issues and organizations including the Creative Coalition. She’s smart, beautiful, and talented. I first saw Washington in a movie at Sundance called “Lift” in 2001. It was a breakout role for her. I wish more people saw that film. I met her in Sundance and knew right away she was going to be a star. And while Vogue has had no trouble putting black women on their covers, Vanity Fair for some reason has been reticent. This is a nice summer treat– and Kerry looks fantastic. Mazel tov!

PS Kerry has a lot of competition at the Emmys this year if she’s nominated on July 18th–Julianna Margulies, Elizabeth Moss, Michelle Dockery, and so on. But I think this is her year. “Scandal” is a hit, and so is Kerry! 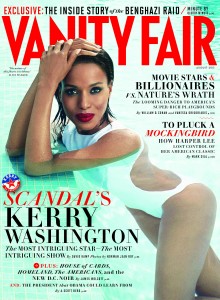