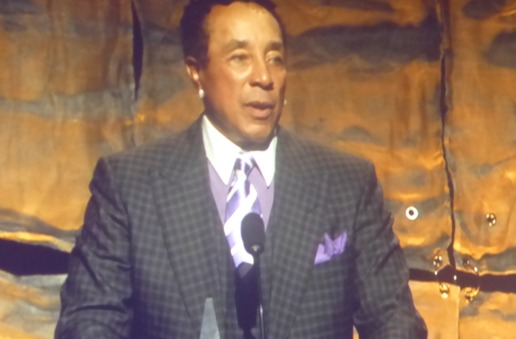 Smokey Robinson is a gem. At Thursday night’s star studded Songwriters Hall of Fame dinner he toasted Motown founder Berry Gordy with an acapella song he wrote for the occasion– and this despite, he said, having just gotten over a case of swollen vocal chords. Here’s the exclusive video:

Smokey is one of my favorite people of all time, and famous for writing three minute hits.

But he can talk. And talk he did on Thursday night. Gordy was getting a lifetime achievement award for creating Motown, and cast members from “Motown: The Musical” were waiting in the wings to perform a bunch of Motown hits after finishing their evening performance across the street.

That didn’t daunt Smokey, who is startlingly poised on stage as a speaker (he used to host the Rhythm and Blues Foundation’s Pioneer Awards with a of panache). He told, in painstaking detail, the story of how as a 16 year old he and the early Miracles– called the Matadors-auditioned songs for the legendary Jackie Wilson in Detroit.

“Instead of singing current songs, we sang five original ones that I wrote,” Smokey recalled. “He didn’t like any of them.”

After being rejected, Smokey saw a kid a couple of years older than himself hanging around. It was young Gordy, who’d written “Reet Petite” and other hits for Wilson. They struck up a conversation, and Gordy, Smokey says, looked over his songs, “He liked them, but he said, You know you have five or six songs in every one. A song has to have a beginning, a middle and an end. At the time, I was very good at rhyming. I could rhyme anything from an early age. So the first verse was all set up and rhymed well. The second had nothing to do with it. It was another song. But it was also rhymed up really well.”

The rest is history of course. Smokey went on to have dozens of hits, including Motown’s standard bearer, “My Girl.” And at least the story did have an end. But god bless Smokey. The guy running the Teleprompter kept sending him signals to wrap it up. But you don’t cut off Smokey Robinson.