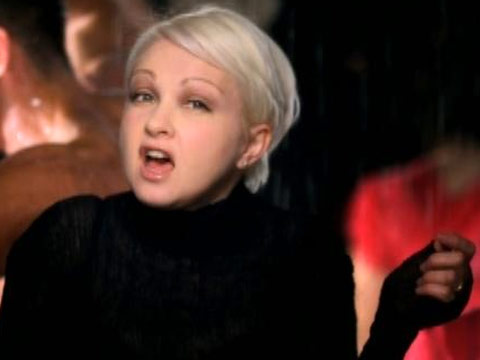 It was Cyndi Lauper’s night at the Tony Awards. Her “Kinky Boots,” created with Harvey Fierstein, won Best Musical. Lauper won for Best Score. Billy Porter won for Best Actor. Lauper et al. beat “Matilda,” the British musical that might have won in a different year. But “Kinky Boots,” based on the little known 2005 movie, reflected what Cyndi Lauper is all about: equality and understanding. It also had great songs.

So what’s she doing next? “I’m going on tour,” Cyndi told me around 2am at an after-after party at the Bemelmans Bar in the Carlyle Hotel. One party raged around her, with Porter and his sister present, as well Tony nominee Shalita Grant from the Tony winning new play “Vanya and Sonia and Masha and Spike.”

The tour starts in San Diego on Wednesday and runs for a month. Then Lauper has a couple of weeks off before another month in Australia and its environs. There’s no rest for the weary.

Upstairs in a suite, another after party raged on, where Patti Lupone greeted winners and losers until she, too, “hit the wall.”

This year’s Tonys seemed like they were sending a message. The winners were people from theater who’d worked hard and long. The losers were talents who came from Hollywood. Certainly Tom Hanks not winning Best Actor for “Lucky Guy” was a surprise. “Lucky Guy” is an enormous financial hit, and Hanks got great notices. But Tracy Letts won for “Who’s Afraid of Virginia Woolf?” The revival, which also won Best Revival of a Play, closed a while ago. Letts is famous for writing “August: Osage County.” This fall, he’s joining the hit TV show “Homeland.” But he is far from a household name.

Someone told me that when Cicely Tyson, age 88, won Best Actress in a Play, Hanks quipped to another actor: “Don’t worry, we still have 40 years.”

Tyson, by the way, will carry on through September doing 7 shows a week in “The Trip to Bountiful.” At the Plaza Hotel after party. she and her posse sauntered in after doing interviews and had dinner near the dance floor. The music was booming. I asked Miss Tyson if she would try another play after coming back with such a success. She smiled widely. The answer was yes.

More news: Tony winner Julie White will come in for a departing Sigourney Weaver in “Vanya” very shortly. Weaver stayed much longer than she thought possible. She has two “Avatar” sequels to make. White will be in “Vanya” through its extended run, which ends in September. “Vanya” will pick up again next January, I am told, at the Mark Taper Forum in Los Angeles.